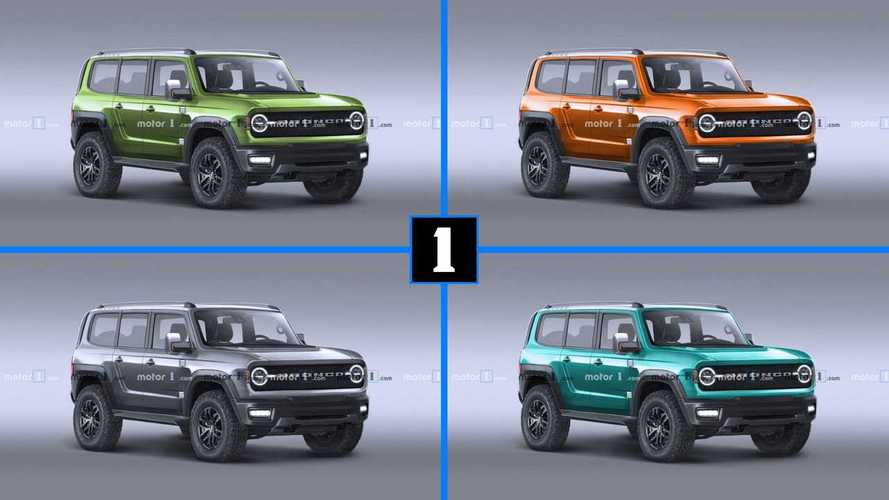 See how the new Ford Bronco might look in a variety of shades.

The Ford Bronco is now mere months away from an official debut, so it's time to start thinking about how you might spec one when sales finally start. Our artist has new renderings to let you imagine what color might look best on the forthcoming SUV, including shades of green, orange, blue, and gray.

Spy shots tell us a lot about the new Bronco. The model wears a boxy shape that evokes the original generations of the SUV. In front, there are round headlights that also pay tribute to the model from the 1960s. The doors would be removable, so the sideview mirrors attach to the A-pillars. Owners would be able to remove panels in the roof and possibly take off the whole thing, similar to the Jeep Wrangler.

The Best Spy Shots Yet Of The New Bronco:

There are only glimpses of the new Bronco's interior. The most noticeable feature so far is a rectangular infotainment screen on the top of the center stack.

The powertrain reportedly consists of a 2.3-liter turbocharged four-cylinder at launch. In the Ranger pickup, this engine makes 270 horsepower (201 kilowatts) and 310 pound-feet (420 Newton-meters) of torque. There are rumors of more powertrains being available later.

All The Facts About The Bronco In One Place:

Rumors indicate the Bronco could debut as soon as the New York Auto Show in early April. If this doesn't prove to be true, then look for an unveiling no later than the North American International Auto Show in Detroit in June. Regardless of the unveiling location, look for Bronco to be available in showrooms before the end of the year.