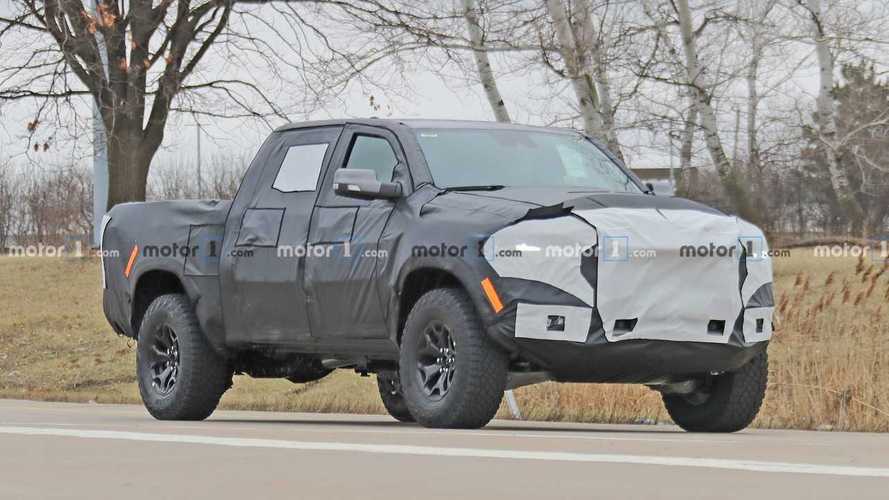 It's covered in camo, but that's no test mule underneath.

We’ve sort-of seen the Ram Rebel TRX. Since Ram announced the Hellcat-powered F-150 Raptor fighter was coming, there have been occasional test mule sightings. This new set of spy shots, however, feature the truck in its production skin.

Yes, it’s camouflaged to the hilt with fake panels underneath to exaggerate body lines. But we still get a sense of the truck’s flared fenders, and we can see what appears to be a snarling grille trying to protrude through the covers up front. That could also be a brush guard, but the takeaway here is the Rebel TRX won’t be a Ram 1500 with blacked-out trim and some badges. Aggressive bodywork should take the handsome Ram styling and inject serious attitude befitting of its supercharged 700-plus horsepower V8 under the hood.

That aggressiveness should extend to the driveline as well. Last year we spoke with an anonymous source that said prototypes were running dual Bilsteins at all four corners, with ARB Air Lockers for both axles. Of course, that’s in addition to a higher ride-height and meaty off-road tires so yeah, it should be a capable off-roader and not just at slow speeds. We’ve seen Rebel TRX test mules playing on sand dunes with an F-150 Raptor in tow, suggesting Ram is serious about going after Ford’s jump-happy truck.

Spotting camouflaged prototypes on the road suggests that testing could be entering the final phase. We’ve heard for some time that the truck should arrive for the 2021 model year, which means we will likely see the covers lifted later this year. The North American International Auto Show’s new summertime venue could be a prime candidate for the long-awaited Rebel TRX reveal.