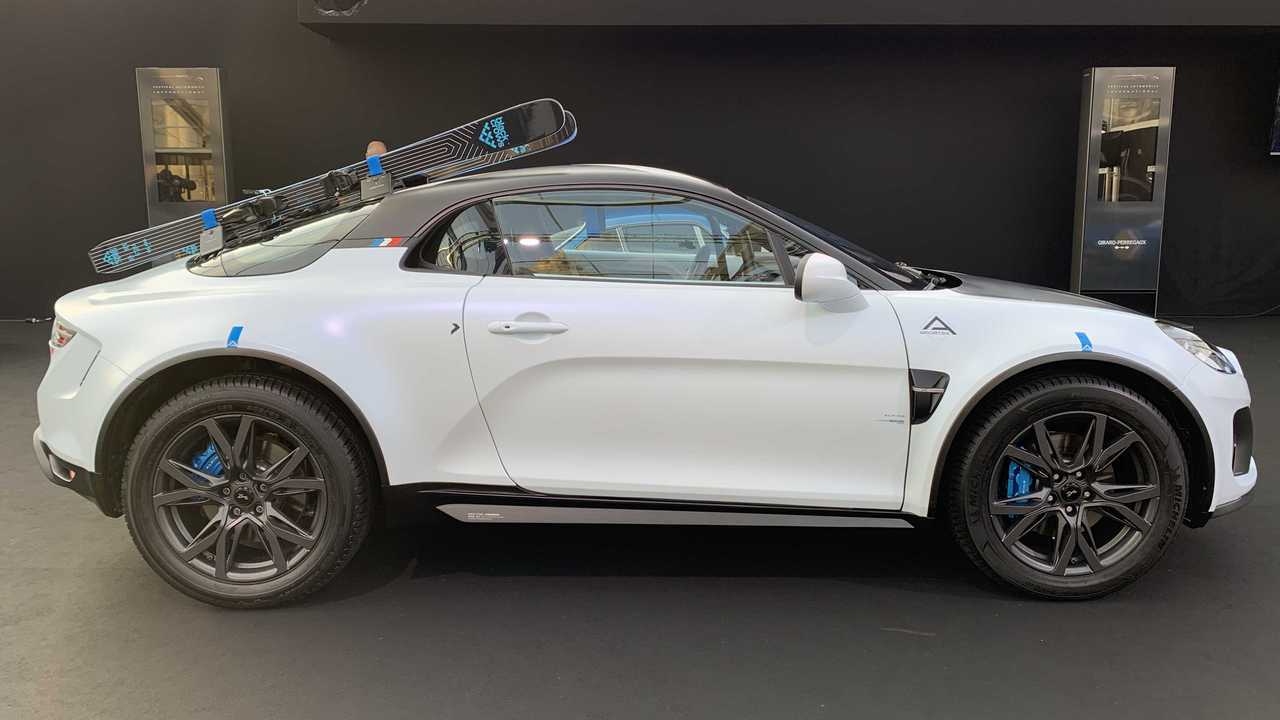 It has a jacked-up suspension and a wider body.

The first rumors of an Alpine SUV can be traced back to 2015, and while Renault’s standalone performance division might be working on a Porsche Macan rival, this isn’t it. Dubbed the A110 SportsX, it’s an extremely rad project created by the company’s design and engineering teams to exhibit at the International Automobile Festival (FAI) in Paris. It takes inspiration from the original A110 rally car, specifically the one that triumphed in the 1973 Monte Carlo Rally.

It combines just about everything you like about France’s Porsche Cayman rival with rugged features you’d normally expect to see from an SUV, plus a ski rack. For example, the suspension has been modified to unlock an additional 60 millimeters (2.4 inches) of ground clearance. As for the body, those chunky wheel arches have widened the coupe by a generous 80 mm (3.1 inches) to enable a beefier look.

The one-off coupe on stilts is based on the A110 Pure, which is considered the back-to-basics variant of the mid-engined machine in its lightest form as it tips the scales at just 1,098 kilograms (2,420 pounds). There aren’t any other mechanical changes beyond the jacked-up suspension, so the SportsX is still rear-wheel drive rather than switching to an AWD layout as some would have probably expected from this SUV-influenced concept with rally car cues.

As with all versions of Alpine’s sports car, the unique A110 is equipped with a dual-clutch, seven-speed automatic transmission developed by Getrag. Motivation is provided by a turbocharged 1.8-liter gasoline engine developing 248 horsepower and 320 Newton-meters (236 pound-feet) of torque. The Pure version completes the 0-62 mph (100 km/h) task in four and a half seconds and maxes out at an electronically governed 155 mph (250 km/h).

The Latest From Alpine:

Alpine A110 Rally Unveiled For 2WD Competition Beginning In 2020

The A110 SportsX shares the spotlight at FAI with a mélange of retro and modern Alpines, including the 1966 A210 prototype and the 2015 Vision Gran Turismo. Also showcased is a 1971 A110 1300 fully rest by its owner between 1995 and 2004, along with the latest iteration of the model, the hotter A110S launched last year with more power and other upgrades.

ALPINE EXHIBITION AT THE INTERNATIONAL AUTOMOBILE FESTIVAL OF THE INVALIDES: BETWEEN RESTROSPECTIVE AND PROSPECTIVE

In 2020, Alpine chooses the FAI for an exhibition featuring historical, present and fantasized models, whose storyline is a back and forth between two eras and the richness of Alpine’s history as an inexhaustible source of inspiration.

For its 3rd participation in the International Automobile Festival of the  Invalides(Paris), Alpine has imagined an exhibition of new or little-known models to the general public: the A210 prototype, the Alpine Vision Gran Turismo, the A110 1800 – 1972 Gp4 driven by François Alessandri and Jean Pierre Manzagol, the A110 SportsX, an A110 "berlinette" 1300 of 1971 and the A110S.

In 1966, Alpine launched a new prototype designed exclusively for competition, the A210. It was used between 1966 and 1969 for Alpine's participation in the 24h Le Mans race. It will be victorious in 1966 thanks to the Grandsire/Cella crew and in 1968 with the Andruet/Nicolas crew. The Alpine A210 presented was manufactured in 1967. It has a Renault Gordini type 58 CI engine and is equipped with a Porsche gearbox. Its top speed is 270km/h, established on the Hunaudières straight in 1969. This A210 took part in the 24h Le Mans on June 14th 1969 with the Killy/Wollek crew. This model will be followed by a new generation of cars intended for competition: the A440 and the A441.

On the occasion of the 15th anniversary of the Gran Turismo driving simulator, Alpine imagined its vision of the game. Presented in 2015 at the International Automobile Festival, the Alpine Vision Gran Turismo was created for the event on a 1:1 scale. Reminders of various Alpine design cues can be seen on this concept, which is only intended for virtual driving. The rear end is reminiscent of the Alpine cars that raced in the Le Mans 24 Hours in the 1960s, such as the A210 and A220, while the front end is inspired by the legendary Berlinette. This Alpine is equipped with a V8 that develops 450 hp. The gearbox is a seven-speed sequential gearbox of 580 Nm. Its top speed is 320 km/h and it weighs 900 kg. This unique model is not available for sale.

The Berlinette A110 in its rally version made its first appearance in 1964. Intended solely for rally racing, this model will reign unchallenged between 1969 and 1972 on all major European and African rallies, winning nearly 150 victories. Alpine won the International Brands Championship in 1971 thanks to Ove Andersson. In 1973, Alpine is crowned World Champion with the A110. The Alpine exhibited at the FAI participated in many rallies. Victorious during the Tour of Corsica in 1972, the Manzagol-Alessandri team came second in the Critérium des Cévennes of the same year. In 1974, it took part in the Rally Jeanne d‘Arc, the Rally du Maine and the Tour Auto. In 1976, the car, prepared with an 1800 engine, went off the road violently during the Critérium de Touraine. A small team of enthusiasts will restore the car entirely. The reconstruction, completed in 2018, took a year with almost daily work. The car is entirely faithful to the original, thanks to original parts. The restored Alpine took part in the Tour Auto 2018, the Modena Cento-Ore and the historic Tour of Corsica.

The A110 is an inexhaustible source of inspiration for Alpine’s development teams. It proves this once again with the Alpine A110 SportsX. The Alpine A110 SportsX is the result of a joint effort by Alpine's design and engineering teams This styling exercise is inspired by the rally versions of the A110 - enlarged and raised - and more specifically from the winning A110 of the 1973 Monte Carlo Rally. With its 80mm wider body and its ground clearance heightened by 60mm, the A110 SportsX explores a new facet of sportiness. Based on the technical characteristics of an A110 Pure, the A110 SportsX remains faithful to Alpine's DNA: lightness and agility for driving pleasure. This unique model is not available for sale.

In 1962, Alpine launched a new model, the A110. It made its reputation on the field of competition by winning the French Rally Championship in 1968 and the World Rally Championship in 1973. The Berlinette A110 becomes the brand’s iconic model. The Alpine presented at the FAI is an A110 1300 dating from 1971. It was restored between 1995 and 2004 by its owner. The two-seater Berlinette has a 5-speed gearbox, an engine delivering 103hp for a weight of 705kg. The body structure is made of fiberglass and polyester resin. The car is compact, light and agile. These characteristics will become the fundamental principles of an Alpine. It is this car that will really define the DNA of an Alpine, which is now found in the new A110.

Unveiled during the 2019 Le Mans 24 Hours, the A110S is positioned at the top of the A110 range. New touches of color express its sportiness with the arrival of orange and carbon. The A110S is faithful to Alpine’s timeless principles of lightweight, agility and driving pleasure.  At its core the A110S uses the same very lightweight and compact aluminum body structure as in any A110, but the unique configuration of the chassis makes it a very focused sports car. The new coil springs are stiffer by 50 per cent and the dampers have been tuned accordingly. The anti-roll bars - hollow to minimize weight - are firmer by 100 per cent. the A110S is a mid-engine, two-seat sports car that delivers 292PS and weighs 1114kg. Priced €66,500* before options.