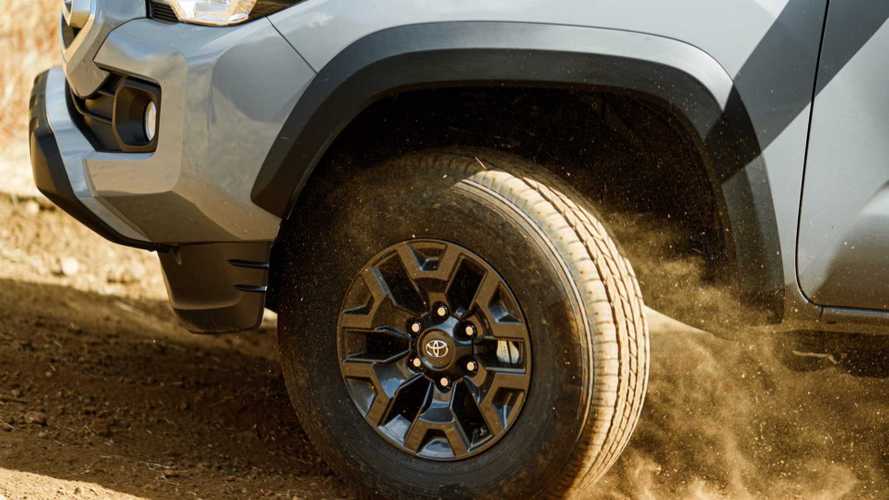 Expect “sporty and outdoorsy, with a touch of nocturnal mischief.”

The Chicago Auto Show begins next week, and Toyota is teasing what it’ll bring to the show. The automaker released a single image of a black, six-lug wheel tearing through some dirt. It’s a Toyota Tacoma wheel – Tundra’s have five-lug wheels – and it hints at “new variants” coming to the company’s lineup. Toyota didn’t give any specifics about the coming variants, but it did detail the Windy City’s forecast: “sporty and outdoorsy, with a touch of nocturnal mischief.”

Check Out The Latest From Toyota:

The Toyota Supra's Instrument Cluster Was Designed By BMW
⠀

Earlier this year, Toyota gave the Tacoma a mid-cycle refresh for the 2020 model year. It was subtle, updating the truck that debuted for 2016 with a new exterior look and more interior features. With a new truck in its stables, and consumers eager for the utility of today’s trucks, Toyota is likely to introduce a handful of new packages for the Tacoma.

Toyota has offered Nightshade edition models before – the 2020 Corolla and 2019 4Runner, for example. Toyota’s “nocturnal mischief” could be just that – a Nightshade package for the Tacoma that adds a host of black accents and other darkened features – like those black wheels in the teaser image. The other variants are likely to play off “sporty and outdoorsy,” offering a different set of upgrades for each.

Save Thousands On A New Toyota Tacoma

While Toyota released only one image of a Tacoma wheel, the company could reveal variants for other models, too. Chicago is a crossover-, SUV-, and truck-heavy show where automakers roll out their special editions, new models, and other high-riding oddities. Sometimes, automakers show off newly available options or go wild with an unrealistic concept.

Toyota will reveal everything next week when the show kicks off in Chicago. Toyota’s press conference is scheduled for Thursday, February 6. Check back then for all the details, photos, and information about Toyota's new variants.

PLANO, Texas (January 28, 2020) – The forecast for the Windy City looks sporty and outdoorsy, with a touch of nocturnal mischief as Toyota debuts new variants to the portfolio. Join us for the Toyota Press Conference on Thursday, February 6, at 10:30 a.m. CST during the 2020 Chicago Auto Show.