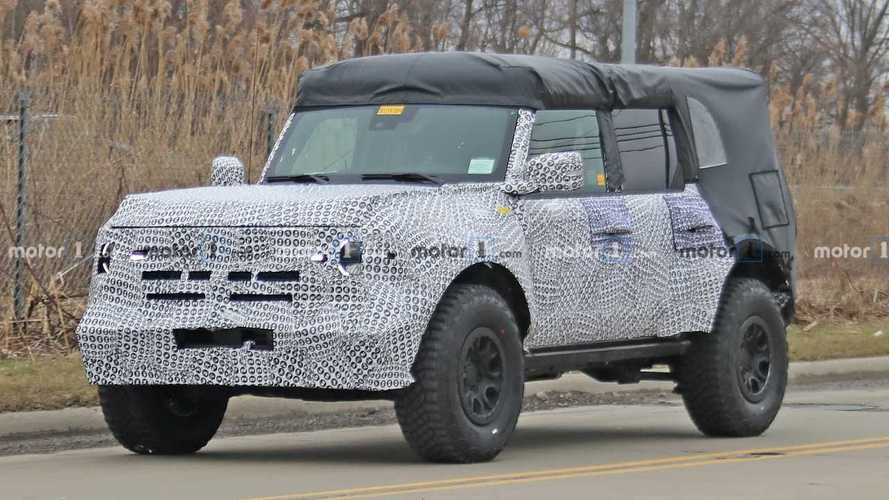 This looks like a Bronco that's ready to conquer the world.

The reveal of the new 2021 Ford Bronco is approaching, which means Ford is finishing the development of the off-road SUV. In the last month, we’ve seen the Bronco’s boxy production debut under heavy camouflage and spotted another with what appears to be its removable roof missing. Now, a new batch of photos shows a beefier version of the Bronco.

The new photos focus on the beefier Goodyear Wrangler 315/70R17 tires borrowed from the Ford F-150 Raptor. Those bigger tires – with bead-lock rims – sit under wider front and rear fender flares that are reminiscent of those on the Bronco R race truck, though they're still dissimilar. The tailpipe also appears different from the others we’ve seen, but it’s difficult to tell for sure. We can also see the headlights and daytime running lights, which match the design of the leaked headlight photo.

Without photos from underneath, it’s challenging to see if the new, beefier Bronco has a different suspension setup. There are likely some off-road mechanical upgrades such as front and rear lockers. Ford’s been adamant from the start that the Bronco would be a capable off-road SUV competing against the Jeep Wrangler, Toyota 4Runner, and others. This beefier version should thrill off-road enthusiasts eager for the Bronco’s return and a worthy Wrangler competitor.

Ford could have easily slapped the Bronco name on a stylish crossover – ahem, Chevy Blazer – but it didn’t. Instead, everything we’ve learned so far about the SUV points to a capable off-road menace that is the pestering bee in Jeep’s bonnet. Various patent filings over the last few years have pointed to removable doors and roof panels, while countless trademarks suggest Ford is gobbling up exotic locales for model names.

Check Out The Other Bronco Spy Shots:

Ford says the new 2021 Bronco will arrive sometime this spring. Initial speculation had the new SUV arriving in Detroit; however, the New York Auto Show in April would qualify, too. We won’t have to wait long.