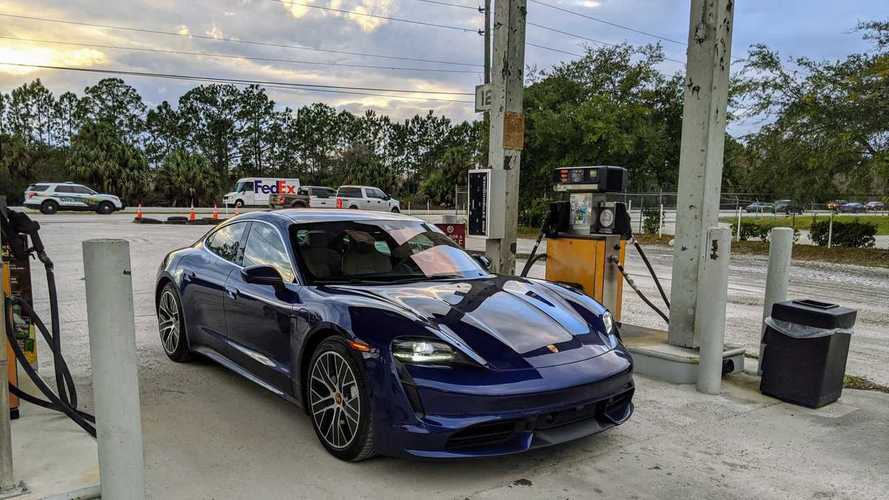 On a long-distance drive, you might do a whole lot better than the EPA-estimated 201 miles.

Motor1.com's partners at InsideEVs had the opportunity to take a Porsche Taycan Turbo on an extended drive from Atlanta, Georgia, to Daytona Beach, Florida, and the electric sedan was easily able to beat its Environmental-Protection-Agency-estimated range of 201 miles (324 kilometers). On that roughly 436-mile (702-kilometer) trip, the Porsche managed 248 miles (399 kilometers) of range per charge.

To be clear, the Taycan Turbo never covered 248 miles between two charges on a single drive during the trip. Because Porsche organized the drive, the company also had scheduled stops at Electrify America chargers along the way. However, writer Tom Moloughney kept careful notes on the state of charge, miles driven, and other data along the way. He then did calculations on the miles covered per kilowatt-hour. Using this info, it's possible to figure out the potential maximum range.

Moloughney and his co-driver paid attention to drive the Taycan like a normal person likely would. "I mean keeping up with the flow of traffic, not gunning it too much but definitely not hypermiling," he wrote in the InsideEVs story. Things weren't entirely serene because as the drivers got closer to Daytona Beach, they pushed the car to "over 100 mph a few times." There was even an impromptu highway drag race against a Tesla Model 3 Dual Motor.

The conditions during the drive weren't ideal for EVs, either. The first leg of the trip was in the 40s Fahrenheit and raining. The next day started around 30 degrees. The final section of the journey finally got into the 60s.

As an interesting anecdote, a Porsche rep told Moloughney that he has covered 230 miles in a Taycan Turbo on a single charge. The planned trip for the journalists on this journey didn't do that "because it would really ruin the day if one of [the journalists] had to be towed."

For the full story, make sure to read it at InsideEVs.