2020 Audi RS Q8 Sleeps With The Fishes In The Netherlands 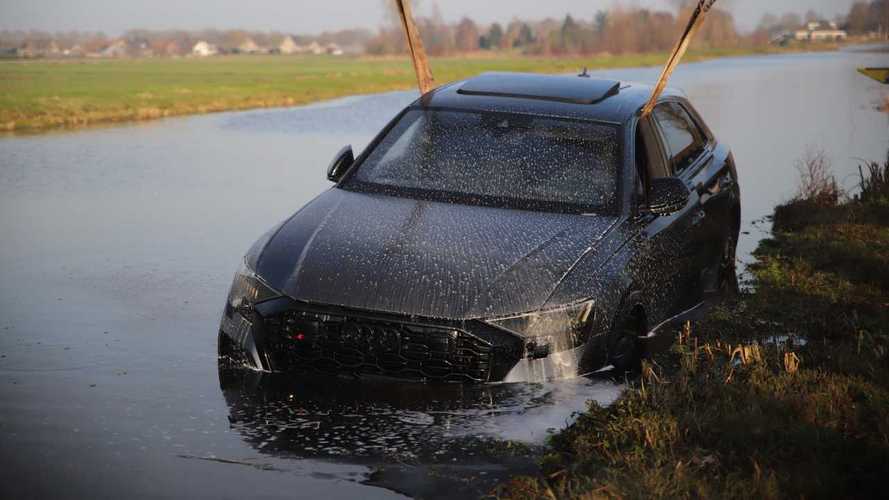 The owner took delivery just a few weeks ago.

The fastest production SUV at the Nürburgring had an unfortunate encounter with water due to unknown reasons – as shown in the adjacent images provided to Motor1.com by Remco F. Gerritsen. It would be easy to simply put the blame on the driver for what happened, but there’s very little info available at the moment of writing about the circumstances that led to this accident. We do know it took place in The Netherlands, specifically in Reeuwijk, and that the driver managed to get out safe and sound. That’s what matters the most at the end of the day.

Running the vehicle’s license plate through RDW – the Netherlands Vehicle Authority – reveals the Audi RS Q8 was registered on January 4, so the owner enjoyed the speedy SUV for only about three weeks before testing its submarine qualities. It’s too soon to say whether the vehicle will ever return to the road, but water and electronics don’t exactly mix.

Bystanders Lift Mercedes SUV Off Of Trapped Pedestrian In NYC
⠀

Audi’s equivalent of the Lamborghini Urus carries a starting price of just under €200,000 in The Netherlands, but reports say this one had an eye-watering €248,901 sticker with options and after taxes or about twice as much as the base RS Q8 in Germany (€127,000). Converted to U.S. dollars, that’s a staggering $274,500 at current exchange rates. It looks like this particular example had the optional 23-inch wheels, which Audi says are the largest they’ll install on a car since putting larger alloys “makes no sense.”

It’s the fastest and most powerful SUV to carry the Four Rings, topping out at 189.5 mph (305 km/h) thanks to a twin-turbo 4.0-liter V8 rated at 592 hp and 590 lb-ft (800 Nm). It lapped the Nordschleife in 7 minutes and 42.2 seconds and was filmed earlier this month while on the Autobahn in Germany casually cruising at its electronically capped top speed.