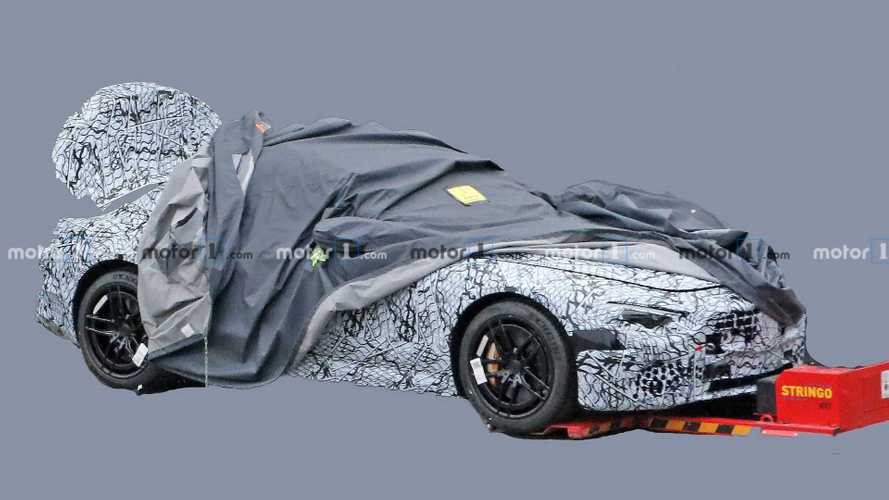 This is by far our best look yet at the all-new roadster.

It’s safe to say the SL hasn’t exactly been a cash cow for Mercedes, but the Sport Leicht remains one of the most important nameplates in the company’s portfolio and therefore must survive. Rather than going the way of the dodo like the smaller SLC / SLK roadster, the grand tourer will live to see another generation early this decade.

Today, Motor1.com is happy to bring you the best spy shots yet of the completely revamped model that will come to replace one of Mercedes’ oldest cars. As a refresher, the R231 was unveiled about eight years ago, so a successor can’t come soon enough. Previously spotted as a shortened E-Class Sedan, the SL has now been caught carrying what appears to be the full production body and lights.

There’s a good reason why Mercedes made an extra effort to conceal the prototype’s roof because there are reports the next SL will revert to a fabric top. We can’t quite see it yet, but there doesn’t seem to be room enough for a large and bulky metal top to fold, thus fueling those rumors about the SL getting a soft top.

The rumor mill also says the all-new SL will switch to a 2+2 cabin, which we’re honestly finding hard to believe since the cabin appears to be quite small. There might be some room in there for two cramped seats à la Porsche 911, but those will be primarily just for kids or maybe adults during short trips.

Here's What We Know About The Next SL:

AMG boss Tobias Moers has already announced the next SL will be “far sportier” than the outgoing model, adding it will reflect the “perfect compromise between driving dynamics and comfort.” It will be available only as a roadster and will be “kind of a cruiser,” with the man in charge at AMG saying electrified powertrains are planned.

Speaking of electrification, the prototype’s quad exhaust system looks similar to what AMG’s “53” models have – an inline-six engine with mild hybrid tech. A while ago, Daimler trademarked a few “73” models, which could use the same 800-horsepower hybrid setup as the forthcoming GT 73. We’re keeping our fingers crossed the super-rare SL73 will return on day.

With the next SL being co-developed alongside the second-generation AMG GT on the MSA platform, some will probably wonder whether this might be the latter. We can’t be 100 percent it’s one or the other, but our spies are inclined to believe it’s the new SL (likely codenamed R232). As you may recall, Mercedes might’ve teased the next GT a while ago in a video featuring Lewis Hamilton playing around with the clay model of a sleek coupe.

The SL is likely the first to come out, so there are more reasons to believe we’re looking at it right now. The current AMG GT has yet to show its Black Series version, so it will be a while before the boys and girls from Affalterbach will introduce the second generation. As for the SL, it might debut sometime next year and go on sale as a 2022MY.