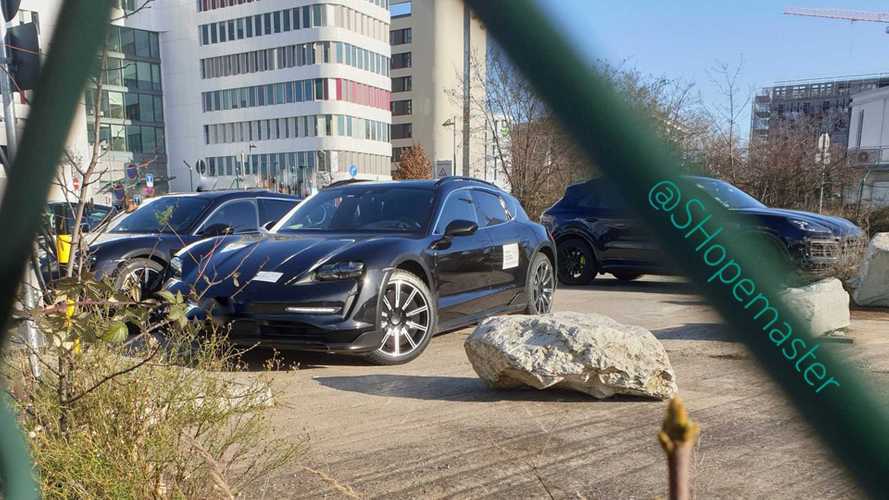 It looks like testing is in full force for Porsche's new EV estate.

There’s been a new sighting of the Porsche Taycan Cross Turismo, and possibly the sleeker Sport Turismo as well. Steven Hopemaster shared a couple of photos on Twitter showing a pair of electrified wagons holding ground at an EV charging station, joined by a third Taycan in sedan form that's still wearing bonkers taillight camouflage. A Cayenne is also spotted in the Porsche fleet, but it’s not wearing electric stickers and not occupying space around the charging dock.

As with our most recent Taycan prototype sighting, these test vehicles appear to reveal the design for the estate’s D-pillar with an up-kink side-rear window. However, what we’re actually seeing is a camouflage cover designed to mimic that shape. The true design is still hidden underneath, and it could well match the sweeping shape of the long roof Panamera. We’re used to Porsche not concealing very much on its test vehicles, but this is one aspect of the Cross Turismo’s design that remains a mystery.

What isn’t a mystery? This gives us a great chance to see the height difference between the Cross and Sport Turismo, though overall the designs should be nearly identical. The powertrain for each will almost certainly mirror what’s available on the Taycan, which means 4S and Turbo variants will offer a range of performance from merely fast to insane. We know with absolute certainty that Porsche will reveal the Cross Turismo later this year as a 2021 model, though the exact reveal date is unknown.

Also unknown is whether Porsche will have improvements over the Taycan’s range. CARB estimates pinned the Taycan at around 280 miles per charge, with Europe’s WLTP rating landing in a similar area. The EPA, however, officially gives the Taycan Turbo a range of just 201 miles, and the Turbo S drops to 192 miles. In response, Porsche revealed its independent test result conducted months prior to the EPA certification, showing figures matching CARB and WLTP data.

Ultimately, we’ll see what the Taycan Cross Turismo has to offer later this year, and if the Sport Turismo joins it at the reveal.