A new report from BMW Blog, citing unnamed sources, says the German automaker will introduce an i4 concept at this year’s Geneva Motor Show. Previous rumors said BMW would show the new 4 Series in Switzerland, so now it's unclear we'll see the new model. This i4 won’t be a wild Vision concept either. According to the publication, we’ll see a very production-ready concept akin to the BMW M8 Gran Coupe Concept. 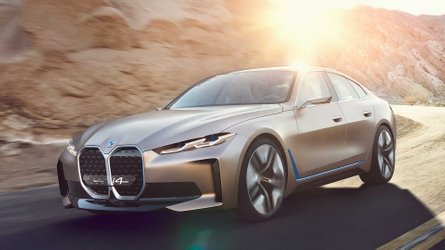 BMW has already teased i4 specs late last year, along with releasing two images of a camouflaged i4. The company says the EV will produce 523 horsepower (390 kilowatts) while offering approximately 373 miles (600 kilometers) of range, though it is uncertain which test cycle BMW used to achieve that number. BMW claims the sedan will run 0-62 mph (0-100 kph) run in about four seconds, which is quick for a car with a 1,212-pound (550-kilogram) battery pack. The top speed is a modest 124 mph (200 kph), though still fast enough to break a few laws.

The 2022 BMW i4 will utilize the automaker’s fifth-generation eDrive hardware, which puts the electric motor, transmission, and power electronics into a single housing. The tech will debut in next year’s iX3 crossover, and BMW says charging the battery pack to 80 percent will only take about 35 minutes. That’s 62 miles of range (100 km) for every six minutes of charging.

BMW, like other automakers, are introducing new, electrified models at break-neck speed. It seems like every week there’s a new electric vehicle that’s either teased, produced, or is talked about being teased or produced. For BMW, that means expanding its “i” of electric cars, which could happen much sooner than previously expected. The i4, iX3, and iX are all apart of BMW’s grand plan to electrifying 25 models – fully electric or hybrid – by 2025.