This Electric Camper Trailer Self-Parks And Sort-Of Tows Itself

It's just a concept for now.

The advent of electric powertrains in the motoring world isn’t relegated to passenger vehicles. Consider this small camper trailer from Australia-based OzX Corp, which looks properly rugged with its black finish and aggressive all-terrain tires. They aren't just for giving the trailer a bit more ground clearance and grip when being towed on trails or open country. They can actually move the camper along without the need for any tow vehicle at all. 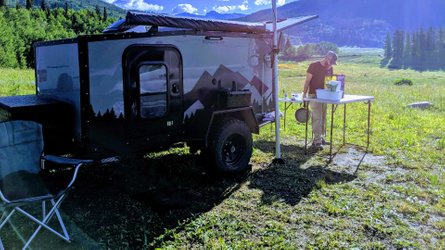 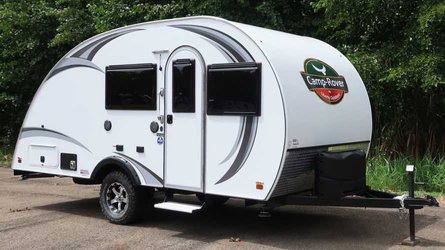 That’s not to say this small trailer is a vehicle unto itself. OzX Corp is developing this camper with all kinds of technology, which includes a hybrid drive system that incorporates hub-driven wheels. According to Hiconsumption, the wheels can generate 11 horsepower for normal operation or 22 horsepower for brief periods. The obvious functionality with such a setup is positioning the trailer after it's disconnected from the tow vehicle, which could significantly help when parking in tight spaces.

However, another use for this system would be as an assist to tow vehicles while on the road. Smaller tow vehicles with less power could be aided by the trailer's self-propelled wheels to essentially lighten the load, especially on steep hills. The hubs also incorporate regenerative braking to help keep the camper’s onboard battery charged up. This could open up new possibilities for using smaller tow vehicles, and while using such vehicles might seem strange to some, having a small, nimble runabout to enjoy when not getting from place-to-place with a trailer can be very nice. We suspect this trailer with a Suzuki Jimny could make for an epic weekend off-grid adventure.

The powertrain isn’t the only advanced feature for this concept camper. OzX Corp is going full digital for this package, which includes all onboard systems connected through a single digital cable. That makes things easier to control, monitor, and diagnose, which can make life significantly easier when you're miles from the nearest hint of civilization.

Unfortunately, you can’t go out and buy this as-yet-unnamed trailer just yet. OzX Corp is still in the development stage with this concept, and there’s no word as to when it will go on sale.