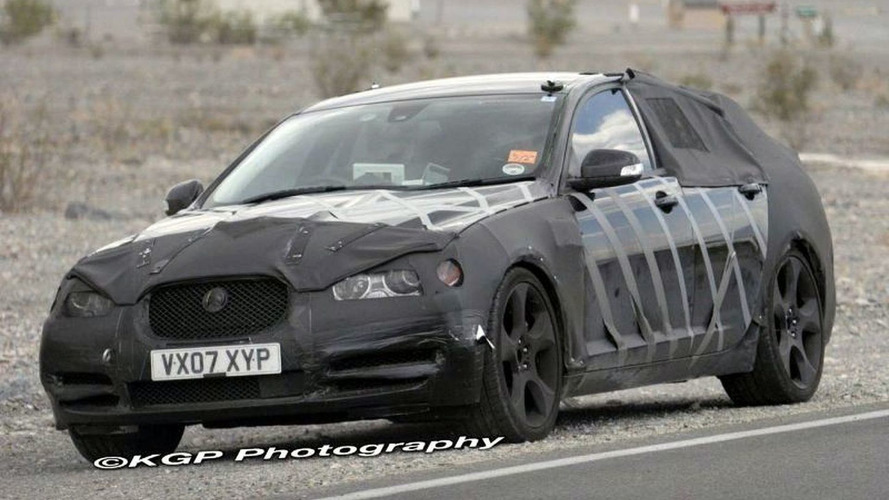 The sculpting matches the general layout of the C-XF concept, with a central power bulge, which narrows as it runs from the windshield to the grille.

Jaguar engineers made the trek from the English Midlands to the American desert Southwest to punish several Jag XF prototypes. Although the heavy rear-end camouflage was still in place, a good portion of the front-end disguise was removed. Whether the partial striptease was necessitated by the day’s record 129 F -degree heat to allow more cooling air through the grille is unknown. Regardless, our latest photos give us our best look yet at the face (and hood) of the production XF sedan.

The wide, rectangular grille is now completely visible, as are the array of additional air-intakes along the front bumper. The gaping aggression of the concept’s arching outer intakes have been toned down and simplified on the production model. Similarly toned down are the “blades” which bisect those intakes. Jag stylists have gone for a cleaner, less polarizing design treatment, perhaps leaving room to move upmarket when Jaguar unleashes the rumored 500-horsepower XFS.

The latest XF prototypes were also running without their usual heavy camouflage covering their hoods, so we can now get a further sense of the production XF’s collection of character lines. The sculpting matches the general layout of the C-XF concept, with a central power bulge, which narrows as it runs from the windshield to the grille. Additional sculpting runs from the A-pillars to the outer edges of the grille, leaving a nice “shelf” affect sweeping back from the headlights. The exact shape of the headlights is still a mystery, but it’s clear that the XF will have a distinctive face that admirably lives up to the concept’s promise. Expect the production XF to shed every inch of camouflage by this September, at the Frankfurt Motor Show.