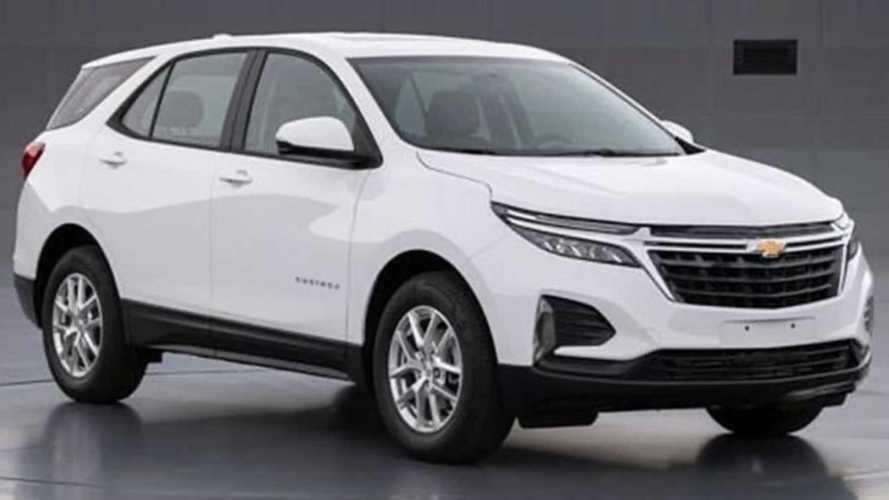 Well, this is mild.

Heavily camouflaged test mules spotted last year show the 2021 Chevy Equinox is about to receive a mid-cycle refresh. Much of the crossover’s design has been hidden beneath swirly, black-and-white paint, though photos making the rounds on Chinese media – possibly originating with China's XCar – may show the production version. A tweet with a trio of alleged Equinox images purports the revised Chevy will debut in the coming weeks.

The photos show a white Equinox with the smallest of changes. Mid-cycle facelifts often revolve around updating the front and rear fascias, rejiggering trims, and giving the interior a once-over to make sure the infotainment still feels snappy. Compared to the mid-cycle refreshes of other makes and models, Chevy’s refreshed Equinox is a mild refresh, if these images are correct.

The 2021 Equinox features a new headlight design that splits the lighting element into two, which is similar to the thin-slit headlights of the Chevy Blazer. The grille looks identical with new chrome trim pieces added for contrast and an upscale feel. The lower fascia is unique, though it seems a lot like the current crossover’s design with just a few alterations. At the back, the taillights retain the same design but feature different styling that puts the reverse lights lower on the taillights. The lower rear fascia also looks new.

The tweet also suggests the 2021 Equinox will also receive GM’s nine-speed automatic gearbox that’s in the Blazer, which is a rumor we’ve heard before. The current turbocharged 2.0-liter engine should carry on unchanged in the new model – at least stateside, anyway. Plus, it’s doubtful Chevy wants to change the current car’s design radically. The Equinox was the only American crossover in the top 10 best-selling vehicles last year. Why upset the applecart?