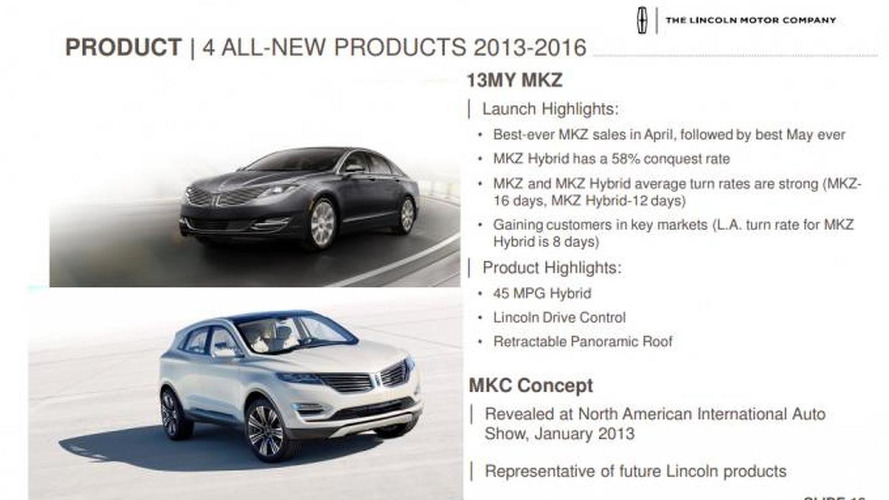 Lincoln is in the midst of a major product revamp and the company has just confirmed plans to launch four all-new models by 2016.

Lincoln is in the midst of a major product revamp and new details are starting to emerge about the company's future lineup.

During a presentation at the Deutsche Bank Global Industrials Conference, Lincoln Global Director Matt Vandyke confirmed the brand will launch four all-new models by 2016. He also announced the MKC concept will be representative of future Lincoln products.

Vandyke also revealed Lincoln expects significant growth in the "small premium car" market. The company has previously hinted at the possibility of entering this segment with the C concept and Reuters' sources have confirmed an entry-level model is under consideration. This isn't surprising since Lincoln says their new products will be placed in the "largest and fastest growing segments."

While the company still faces an uphill battle, Lincoln is hoping an improved buying experience will sway buyers in the United States. Under this initiative, the company will have dedicated retail facilities and staff as well as a variety of new services including a new car delivery program and online concierge services.

Lincoln is also pinning their hopes on a successful Chinese launch in the second half of 2014. In order to achieve this, the company plans to have "warm and inviting" dealerships with personalization studios and doorman who will invite people into the store.