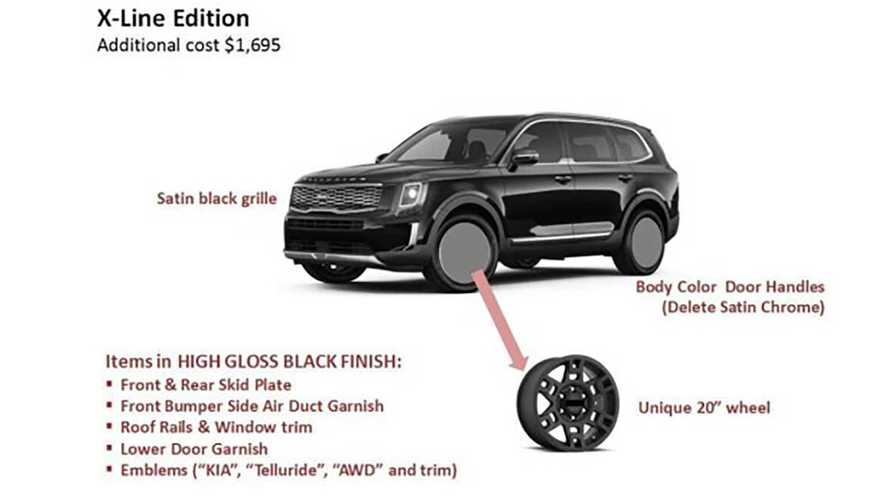 Thanks to a tipster, we have an idea about what Kia is planning for the Telluride's future.

UPDATE: Kia responded to our questions about this survey.

"We are always looking for ways to increase the appeal of our vehicles… don’t forget our mantra is 'Give it Everything!'  Nothing to confirm today other than the fact that the Telluride is still on deep back order and the hottest vehicle in one of the hottest segments. Last I heard, we were averaging 7-8 day supply nationwide," company spokesperson James Bell said.

A recent rumor suggested that Kia was considering whether to build a rugged-looking version of Telluride crossover. Now, an anonymous Kia employee has reached out to Motor1.com offering strong evidence of the model's consideration for the lineup. An internal survey showed off what the automaker was thinking about how to dress up the appearance for a Telluride X-Line.

According to this information, the Telluride X-Line would be a $1,695 package and would largely focus on changing the crossover's aesthetics, rather than adding off-road ability. The additional features would allegedly include a set of black, six-spoke wheels with cutout details. The survey also suggests the equipment could include a satin black grille and body-color door handles. High gloss black would cover the front and rear skid plates, front bumper side air duct trim, roof rails, window trim, lower door trim, and emblems. It's worth noting that the questionnaire says these are the elements that Kia's stylists would consider changing, but if production happens, then the crossover could use different finishes.

The tipster also says that an earlier survey is about an extended wheelbase version of the Telluride. Our source didn't supply an image of this questionnaire, though.

The Telluride is still a fresh entry into the Kia lineup in the United States, but the crossover is gaining accolades quickly. Among the vehicle's prestigious awards, it's North American Utility of the Year. Given this burgeoning popularity, the automaker is naturally trying to capitalize on things by adding new packages to the lineup. The relatively simple trim changes that this survey describes would be an easy way to offer customers a different look for the vehicle.