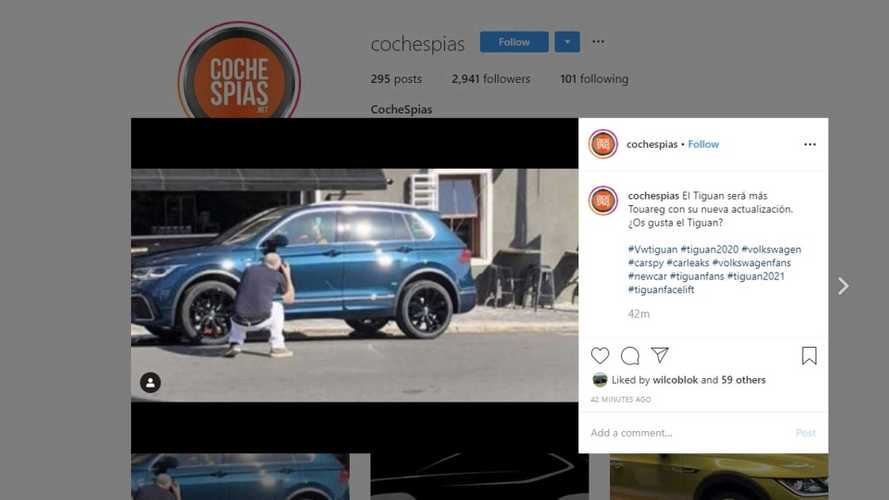 A reveal could take place in March at the Geneva Motor Show.

The second-generation Volkswagen Tiguan has been on sale for more than three years and that means it’s almost time for a mid-cycle update to keep the model fresh in a hugely competitive market. An official reveal of the facelift might take place in the months to come seeing as how the peeps from Wolfsburg are already shooting commercials of their revised Tiguan in the standard five-seat version.

The 2021 Tiguan was spotted at an undisclosed location as depicted in the adjacent image shared by CocheSpias on Instagram. The photo’s quality is not exactly great, but you can easily notice there are all-new headlights lending the crossover a more modern look. The front bumper also appears to be different as the air intakes are quite large and the fog lights are nowhere to be found, providing the fascia with a cleaner look.

Since the Tiguan was part of a photo shoot, it goes without saying the version we’re looking at has all the bells and whistles. We are tempted to believe it’s the R-Line model as the front fender appears to be holding the namesake badge, while the black alloy wheels and the aforementioned big air intakes also point towards the direction of the upscale Tiguan.

Although not visible in this low-resolution photo, the taillights likely have a new look as well since it would make sense for VW to freshen up the LEDs at the back where the bumper will probably go through a nip and tuck as well. Chances are the “Tiguan” lettering will be placed in the center of the tailgate below the VW badge in the same vein as on other models such as the Arteon, Golf 8, and the latest Touareg.

According to a report from last September, the Tiguan facelift will be unveiled sometime this year together with a near-production Tiguan R concept. The road-going performance version is slated to arrive in 2021 with over 300 horsepower from a turbocharged 2.0-liter engine working with a 4Motion system and a DSG.

Meanwhile, the regular Tiguan could premiere as early as March at the Geneva Motor Show. The seven-seat Allspace model should follow shortly with the same updates.