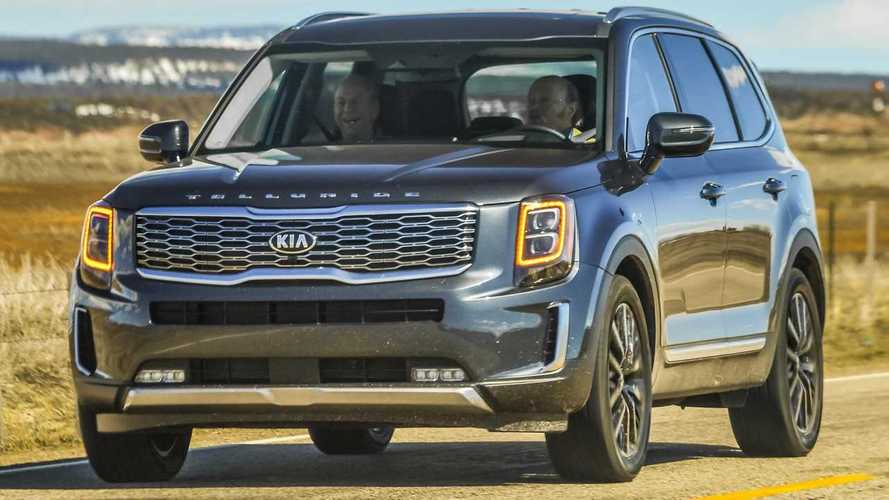 The rumors are thin, but they conveniently surface just ahead of the Genesis GV80 reveal.

The Kia Telluride debuted almost a year ago to the day, having impressed crowds at the 2019 Detroit Auto Show. Perhaps in celebration of that anniversary, new rumors are percolating that more variants are coming for the three-row SUV, both in terms of luxury and ruggedness, but take it all with a grain of salt. The source offers no supporting evidence for the hushed talk, and a Kia spokesperson tells Motor1.com that there's been no official confirmation for such a model from its American division.

Evidence That A Rugged Model Is Coming:

These rumors surfaced at Autospies.com courtesy of a blog post by someone called Agent00R. It’s a short post that suggests a higher-spec Telluride with more luxurious appointments is coming, but the only specific "luxury" item mentioned is a two-tone roof. The post also mentions an off-road package that, among other things, would offer skid plates and beefier all-terrain tires. As for what the models might be called, or any other information, nobody knows. Like we said, take it with a major grain of salt.

Why bother mentioning this at all, then? There is one thing interesting about these rumors – the timing. On January 16, the new Genesis GV80 luxury SUV will finally break cover. It will ride on its own platform, so nothing is shared with Kia’s parent company, Hyundai. But we can’t help wondering if Kia might give the Telluride a bit more visual punch to attract buyers who aren’t interested in the current model, but can’t afford stepping up to the Genesis. All profits come back to the Hyundai Motor Group regardless, and it's not like the world isn't SUV crazy right now.

Our Take On Telluride:

That said, the range-topping Telluride SX isn’t a barebones machine by any means. Our review found it to be a very comfortable SUV with plenty of luxurious touches and a plethora of technology to satisfy drivers and passengers. The major shortcoming for us was the 291-horsepower 3.8-liter V6, which felt a bit weak for duty in a three-row people mover. Otherwise, it already offers Nappa leather accommodations with heated and ventilated seats for the first two rows, a heads-up display, and all kinds of standard safety systems like automatic emergency braking, lane-departure warning, and more.