Dress Up Your Motorhome With These Black, Heavy-Duty Wheels

There are a wide variety of sizes, bolt patterns, and offsets available.

For most motorhomes, the features on the inside matter a lot more than the aesthetics of the exterior. If anyone is looking to upgrade the look their rig's look, then Black Rhino's Havasu wheels would be a solution for adding a dark, rugged appearance to the exterior.

The Havasu's design features a thick central hub with a stylized rhino in the middle. Twelve spokes connect this section to the outside, and the outer rim has a beadlock-like style. The matte black finish completes the look. Check out a variety of applications for these wheels in the gallery above. The appearance is quite an upgrade over the rather boring wheel design that motorhomes generally wear. 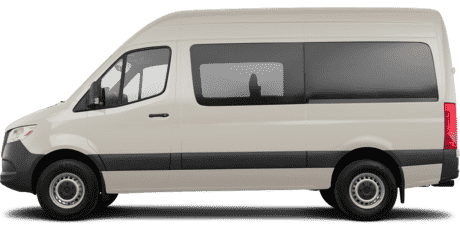 save over $3,400 on average off MSRP* on a new Mercedes-Benz Sprinter Crew Van

The Havasu has a load rating of 3,300 pounds per wheel. Black Rhino specifically engineers them for commercial vans, like the Ram Promaster, Ford Transit, and Mercedes-Benz Sprinter, in addition to RVs and SUVs. The available sizes are 16x7.5, 17x7.5, and 18x8. There are also a wide variety of five- and six-bolt patterns and offset options to fit these vehicles.

Living Life On The Road:

Prices for the Havasu wheels start at $264 each for the 16-inch version. The 17-inch size goes for $286, and the $18-inch version is $330. If you're interested in them, Black Rhino has an availability page showing the current stock of each size and offset.

The Black Rhino Havasu is an adaptable twelve-spoke off road inspired wheel design that is unforgivingly over-engineered for your heavy duty conversion van and recreational vehicle (RV) build. Recognized as the trusted choice for extended cross-country camper van adventures that often veer off into unpredictable environments.

The Black Rhino Havasu gracefully threads the needle between on and off-the-grid camper van touring with its tough, yet precision stamped look. Striking bold details start with the beveled spoke windows and built-in edge ring, whereas the defined bolt-on center cap sparks just enough sophistication on this minimal monoblock wheel that makes the Black Rhino Havasu a solid match for your conversion van of choice - whether it's a Mercedes-Benz Sprinter, Dodge Promaster or a Ford Transit.

True to fashion, the Black Rhino Havasu pairs well with business or pleasure. The industrial construction of the 12-spoke, flat profiled off road wheels features tough construction elements such as angled spoke edges and window corners that attribute to the industry leading wheel load rating of 3,300 lbs/wheel - a rock-solid wheel function that maximizes your sprinter van's uptime and keeps you rolling right along no matter the challenge.

Discover all of Black Rhino's sprinter van wheels, transit van wheels and camper van wheels, by visiting the simple to use online Fitment Guide on our website to see all possible van conversion wheels based on year, make and camper van model. The Fitment Guide will also introduce visitors to all other important technical details that are significant, such as offset (positive, neutral or negative), load carrying ratings and live factory warehouse inventory levels.

The Black Rhino Truck Wheels Configurator tool goes a step further and allows van conversion enthusiasts to visualize all compatible Black Rhino camper van rims on a realistic render based on year, make, model and even color for most transit vans and conversion vans.

The company's website http://www.blackrhinowheels.com includes helpful dealer locator tools, by zip code in the United States and internationally. The website also features dealer support tools, including online access to the live inventory in Black Rhino's new 155,000 sq. ft. headquarters in Brea California. For dealers, all Black Rhino conversion van rims can be ordered on the website and orders received by 4pm ET are shipped the same day.

Black Rhino, an off road rims manufacturer with a South African heritage, donates a portion of all Black Rhino transit van rims, sprinter van rims and van conversion wheels' sales to combat the complex Rhino poaching crisis in South Africa. That means the impact of your purchase and passion goes beyond camper van rims themselves - it enables the conservation efforts that help protect the native Black Rhino from extinction.