These Two GM Trucks Have Over 1.5 Million Miles Between Them 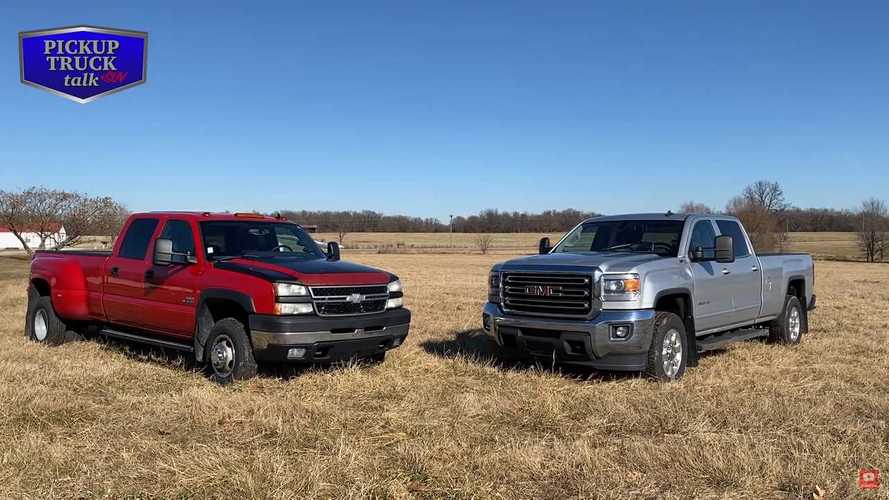 The 2007 Chevy Silverado HD dually has over a million miles by itself, and the powertrain is original.

Here’s something special for the pickup fans out there, and by that, we’re not talking about sky-high lifted show trucks. Tim Esterdahl of Pickup Truck & SUV Talk has a nose for finding folks who literally get the most out of their trucks, and he has a new two-part video series featuring a pair of big GM pickups with over 1.5 million miles between them. Specifically, the 2015 GMC Sierra HD has over 500,000 miles but the 2007 Chevrolet Silverado HD one-ton dually known as Big Red is the real jaw-dropper. It has 1,039,000 miles and still runs the original powertrain. That’s impressive any way you cut it.

Save Thousands On A New Chevrolet Silverado 3500HD

Both trucks are owned by Brook Smith, who makes a living delivering RV trailers throughout the U.S. and Canada, and we do mean throughout. He’s driven to every state except Hawaii (for obvious reasons) and covered each Canadian province as well as two Canadian territories. Both trucks have GM’s Duramax diesel engine, and yes, the 2007 model turned over a million miles without any significant powertrain repairs.

In the videos (part one above, part two below) Brooks says he bought the 2007 Chevy brand new, and aside from regular maintenance, he replaced the fuel injectors around 500,000 miles. As for the Allison automatic transmission, he swapped in a heavy-duty torque converter at 400,000 miles not because the factory converter was bad, but because he wanted extra insurance for the big towing jobs he was tackling.

As for the 2015 Sierra, he ultimately bought it because he wanted a newer truck, but he was also acutely aware his trusty Chevy was getting quite long in the tooth. Expensive maintenance would eventually be required, so instead of making that investment into the Silverado, he bought the Sierra used with 93,000 miles and started the one-million march all over again.

Giving Me A Million Reasons:

Bugatti's Next Model 'Won't Be An SUV', Will Cost $1 Million

This summary is just the tip of the iceberg for Esterdahl’s in-depth interview with Smith and how his trucks go the distance. The videos discuss everything from maintenance to tire pressures, best-practices for towing, differences between single- and dual-rear-wheel trucking, and interesting observations on the different generations of Duramax power under the hood of both pickups. If you live the truck life, the clips are full of interesting tidbits and insights to absorb.