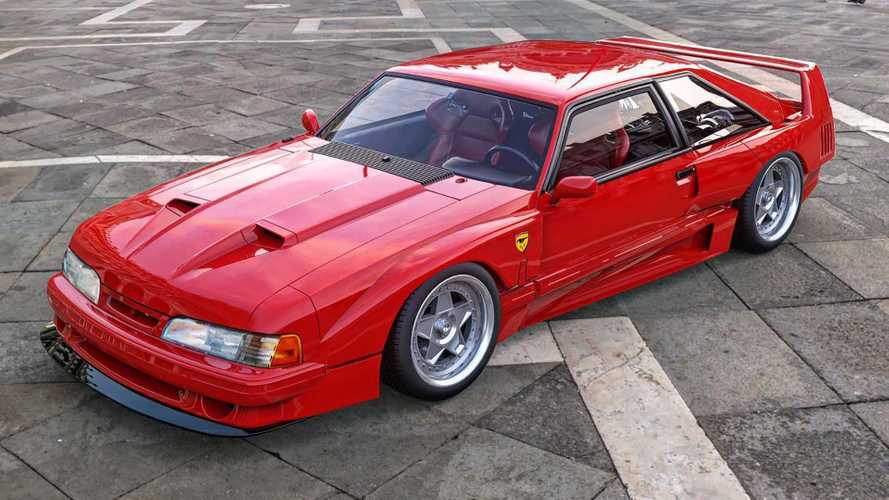 There’s a bit of the Ford Thunderbird mixed in, too.

The 80s were weird. Home computers and video games became things. Fuel injection arrived, and MTV could beam the hottest music videos straight to your television. The 80s also saw car design take a sharp, futuristic turn long before computers could fit in your pocket. The Ford Mustang and Ferrari F40 embodied the 80s-ness of the era, even though the Fox Body Mustang arrived prematurely in 1979. You have America’s pony car, clawing its way back to performance dominance, while Ferrari designed the F40 to celebrate the brand’s 40th anniversary. Both were distinct in performance and design, but Abimelec Design thought it best to mash the two together, and the result is fantastic.

More Cool Cars We Can't Have:

In a Facebook post showcasing the F40xbody renderings, Abimelec Design breaks down how to pair such mismatched machines. While their proportions are different, the classic Ferrari and Ford are close to each other in length – less than 12 inches (30 centimeters) separate the two. From the sounds of it, Abimelec Design started with the Mustang and built the F40 around it, lowering the roof, widening the fenders, and adding the wing. The Ferrari F40-like wheels and Rosso Corsa paint tie the entire package together.

Powering the F40xbody isn’t an Italian V12. For Abimelec Design, the powertrain of choice is Ford’s flat-plane crank 5.2-liter V8, which needs two turbochargers because, at this point, why not? Don’t let the long hood fool you, either. While the engine is American, its placement is not. The F40xbody is a rear-mid-engine supercar. The renderings also feature headlights from a third make and model – the Ford Thunderbird.

It feels like the F40xbody rendering came from a parallel universe where Ford really did buy Ferrari. It looks like a real, even if the proportions still feel a bit pubescent. And it’s not like such boxy automobiles weren’t the norm in the 80s. It’s difficult to look at the F40xbody and not see hints of the Mustang JBA Dominator and Audi Quattro in the design. And that’s not a bad thing.