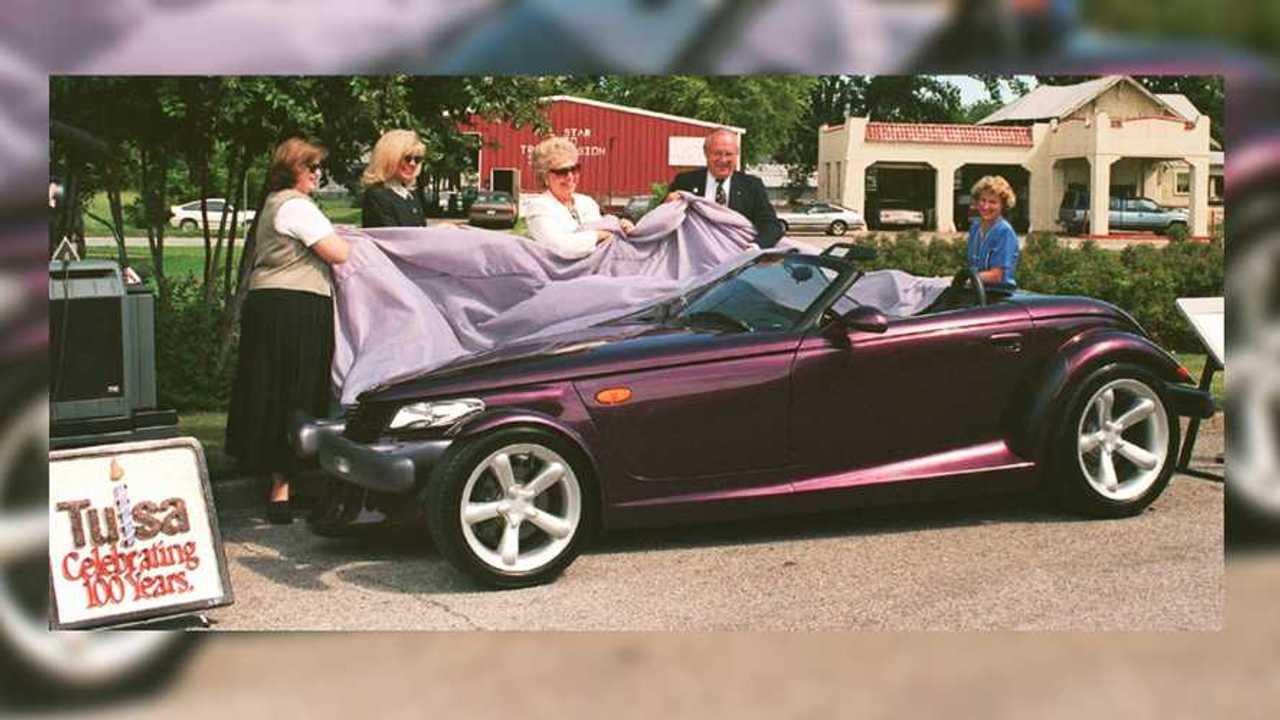 Let's hope it fares better than the last Plymouth the city buried for 50 years.

When you think of the year 1998, what comes to mind? Now, imagine yourself forward to the year 2048 and try to envision what the world might be like. Since you’re likely of an automotive mind as we are, your future vision is probably filled with electric vehicles that still resemble cars we see on the road today. It’s doubtful any of them will resemble a 1998 Plymouth Prowler – even in 1998 nothing else resembled a Prowler – but in 2048 there will be at least one Prowler on the streets of Tulsa, Oklahoma. And if all goes according to plan, it will still be shiny and new.

Back in 1998, Tulsa celebrated its 100th anniversary in grand fashion that included, among other things, burying a time capsule to be unearthed 50 years later. Basic math tells us that will happen in 2048, and the capsule was just large enough to hold a brand-spanking-new Plymouth Prowler. A few other items such as city documents, music CDs, student projects, and a proper late-1990s cell phone are in there with the car. But the Prowler is obviously the big tamale.

For those who may not remember, the Prowler was a bonkers modern-retro two-seat roadster that rocked styling cues such as a short windshield and exposed front suspension usually seen on classic hot rods. Instead of a snorting V8, however, the Prowler wielded a mainstream Chrysler V6 that, while not slow, certainly didn’t fit the car’s aggressive stance and sleek profile. It was only produced from 1997 through 2002, and while it was underwhelming in many ways, we’re forced to admit it’s an ideal machine to properly preserve the retro craze that pervaded the U.S. auto industry at the turn of the century.

The big question now is how it will look after being underground for 50 years. Tulsa previously buried another Plymouth in a concrete time capsule back in 1957 as part of its 50th anniversary, but when it was raised in 2007, water had flooded the entire enclosure and destroyed the car. The Prowler was encased in a box made of half-inch aluminum that was welded together, but since the project took place 10 years before the water-logged 1957 Plymouth was excavated, city officials were unaware of the previous capsule's failure. Still, extra care was taken to help ensure this capsule stays airtight and sealed for its 50-year slumber in the ground.

It’s been down there for 22 years thus far, but nobody knows the condition of the capsule. Barring unforeseen circumstances, it will be another 28 years before the car's ultimate fate is known.