Shots fired. Polaris is teasing the latest iteration of its three-wheeled autocycle, the Slingshot. A short teaser video and a still image on the Polaris consumer site gives us a glimpse of the Slingshot’s new face, which appears to trade the round headlamps of the 2019 model for stylized lights that are complemented by a pair of lamps located in the vehicle’s lower fascia. Likewise, the central front lighting of the vehicle trades round lamps for a formal light bar. The result is a Slingshot with a more cohesive front-end design.

Sling And A Miss: 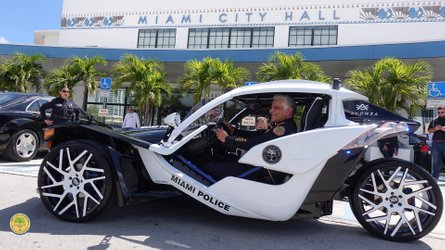 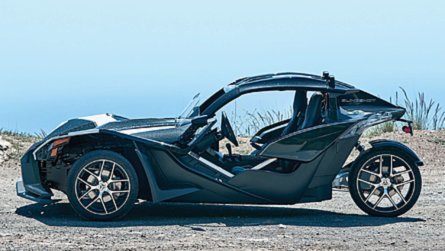 What else changes remains up in the air. Nevertheless, we imagine many of the vehicle’s body panels carry over to the new design, as the teaser vehicle’s front fenders and hood appear to mirror those of the 2019 Slingshot’s.

That doesn’t mean the new Slingshot is merely a facelift, though. While we don’t expect the model to feature significant changes to its basic underpinnings, we wouldn’t be surprised to discover alterations to the vehicle’s powertrain.

The 2019 Slingshot relies on a General Motors-sourced 2.4-liter four-cylinder engine, which supplies 173 horsepower to its lone rear wheel. However, it’s possible the new Slingshot welcomes a more modern GM engine; possibly the turbocharged 2.0-liter inline-four that motivates the four-cylinder Chevrolet Camaro and Cadillac CT4. In the former car, the engine makes 275 hp; in the latter, it makes 237 ponies. Should Polaris employ the turbo 2.0-liter in the new Slingshot, expect the vehicle to trade the 2019 model's five-speed manual for a six-speed stick.

Of course, there’s always the possibility the Slingshot carries on with its current 2.4-liter four-pot or that the three-wheeler trades its GM-sourced engine for one from an entirely different manufacturer. Regardless, we’ll know more when Polaris formally pulls the covers off of its new Slingshot.