The rest of the vehicle looks like a stock Cayenne Coupe GT.

If you are holding off on buying a Porsche Cayenne Coupe until a hotter model arrives, then here's your answer. These spy shots possibly reveal the brand's development of the Cayenne Coupe GT.

The front of this Cayenne Coupe looks largely identical to the existing models. There's no camouflage that's readily visible, and you might think this is just a normal example of the crossover.

However, the most interesting element of this model is at the back. Porsche fits two fake exhausts, but the snow covers them up. The real outlets are closer to the center, and the heat of the gases keeps them exposed.

The revised outlets suggest powertrain revisions for this model. Earlier reports indicate that Porsche might use the powertrain from the Cayenne Turbo S E-Hybrid as a starting point but boost the output even higher to around 820 horsepower (612 kilowatts) instead of this setup's current 670 hp (500 kW). To control this high output, there would be a sophisticated all-wheel-drive system. 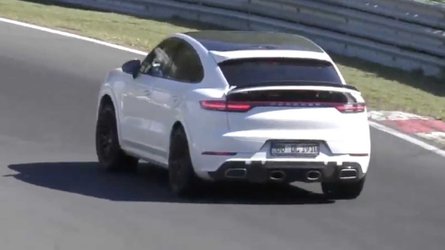 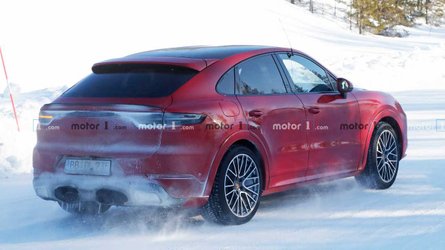 Although, other reports indicate the model could get the Lamborghini Urus' 4.0-liter twin-turbo V8. In addition, the performance SUV would have a sport-tuned suspension for spirited on-road performance. There would also allegedly be brake upgrades. On the inside, expect there to be heavily bolstered seats.

There's no indication of when this meaner Cayenne Coupe might arrive. Porsche has a lot of 911 variants, including the Turbo and Targa, to debut in 2020. However, the company likely could find a slot at some point in 2020 to unveil this performance-focused crossover.