The hatchback doesn't look like a production-ready piece, but the rest of the vehicle looks ready to arrive in showrooms.

A user on the Mach-E Forum was able to snap some shots of Ford's upcoming EV while it was on  U.S. Highway 101 in Los Angeles. Unfortunately, the photos don't capture the vehicle from the front.

This Mach-E doesn't appear to wear any camouflage. However, the white hatchback doesn't appear to be a production-spec piece. Photos from the EV's debut show this panel with a more complicated shape, including subtle creases underneath the taillights.

The rest of this Mach-E looks just like the version from the debut. The black, five-spoke wheels give the car an aggressive appearance over the matching color for the body.

The Mach-E doesn't arrive in showrooms until late 2020, but Ford is already taking pre-orders for them. So far, the Carbonized Gray color is the most popular by being the choice for 38 percent of customers, but Grabber Blue Metallic is a close second with 35 percent of the orders. In addition, 55 percent of folks want the EV with an all-wheel-drive powertrain, and 80 percent of them ask for the extended-range battery.

The Mach-E Is An Electrifying Addition To Ford's Lineup: 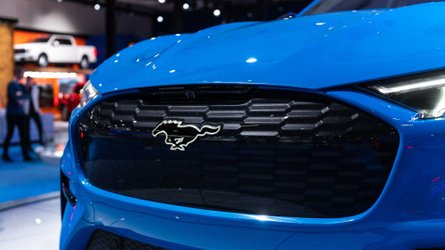 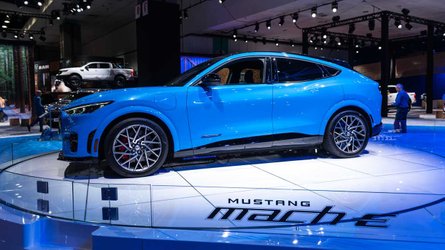