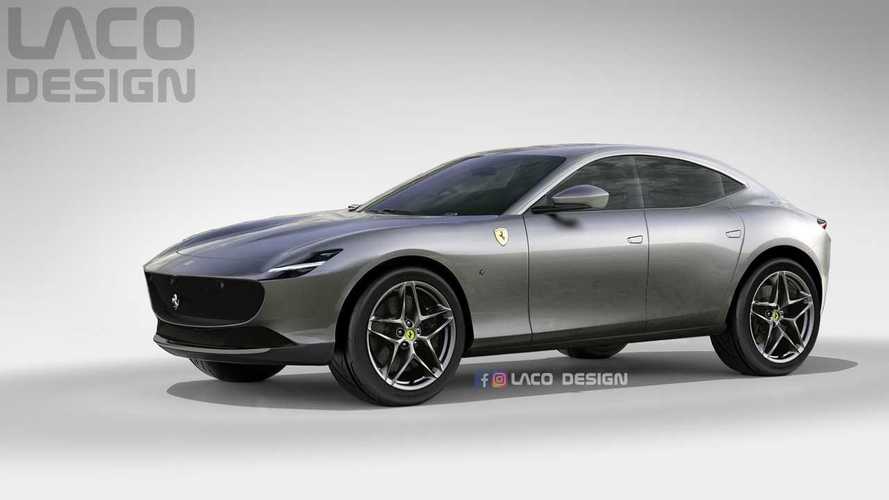 The brand's first SUV will have a design derived from Maranello's newest grand tourer.

With Ferrari announcing the Purosangue is going to have Roma-influenced styling, the adjacent rendering was only a matter of time. The digital exercise provided by LACO Design attempts to see into the future of Maranello’s first SUV and how the curvaceous styling of the Italian grand tourer will translate into a high-riding vehicle to go after the likes of the Aston Martin DBX and Lamborghini Urus.

Speaking of those two SUVs, their respective designers went for that sports car look on stilts rather than sticking with the tried-and-tested SUV styling formula. It’s a decision that has certainly paid off for Lamborghini as the brand’s sales have exploded since the launch of the LM002’s spiritual successor, while Aston Martin has high hopes that its Wales-built DBX will also be a massive commercial success.

We’ve only seen the Purosangue once in real life, but it was an early test mule hiding underneath the raised body of the GTC4Lusso. It’ll be interesting how the Ferrari with rear doors is going to look once the wraps will come off sometime in 2021, but we have high hopes it will be an attractive SUV taking into account the company’s latest design language.

There’s a very good chance the actual Purosangue won’t look like this since Ferrari is unlikely to simply carry over the Roma’s styling and make minor adjustments to adapt it to SUV’s higher ground clearance. The adjacent rendering takes the promised design influence to the maximum, but knowing Ferrari, the vehicle will have plenty of unique styling traits to separate the SUV from its two-door cousins.

Ferrari Is Finally Making An SUV:

Not only will its design be derived from the Roma, but the Purosangue FUV (meaning “Ferrari Utility Vehicle”) will ride on an adaptation of the same newly developed platform that debuted with the GT. While the hardware has been developed to accommodate V8 and V12 engines, it will also be compatible with the company’s forthcoming V6 unit and hybrids.

In the case of the tall prancing horse, it’s believed the engineers are favoring an electrified powertrain. Despite the downsizing trend across the entire automotive industry, Ferrari has confirmed it will not discontinue its naturally aspirated 6.5-liter V12 powerhouse as it will find a way to optimize it and cut emissions to keep the regulators happy. Aston Martin strongly hinted recently a V12 DBX AMR could happen one day, and we’re keeping our fingers crossed that Ferrari will be going down the same road with its Purosangue.