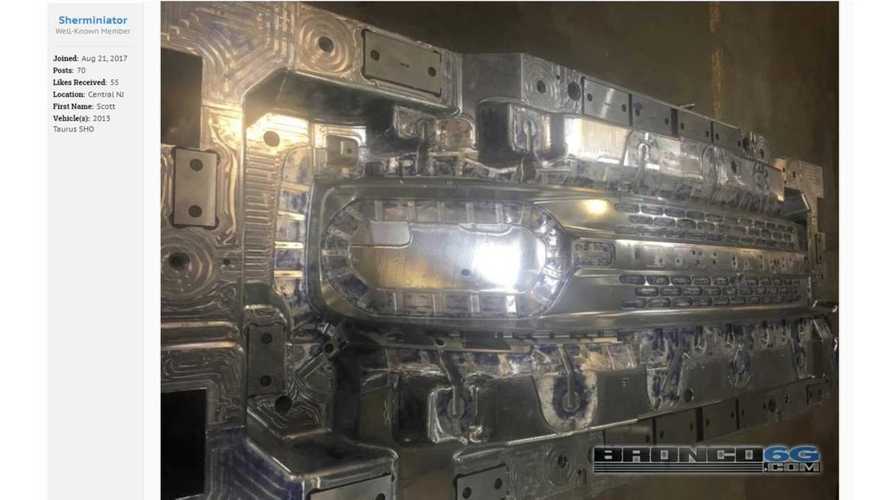 The shape of the headlights is vastly different compared to what the big Bronco will have.

It was only a few hours ago when we shared an image of the Ford Bronco’s retro-flavored headlight design and now another interesting image has emerged. Published on the same Bronco 6G forums, the adjacent photo gives us a pretty good view of the “baby” Bronco’s grille flanked by what appear to be oval headlights. The lighting clusters represent a significant departure from the circular lights of the SUV’s bigger brother.

How do we know it’s a Bronco? Well, it says so between the headlights on the horizontal bar where the “BRONCO” lettering has been stamped across. Look above and below the model’s name and you’ll notice a mesh pattern with cutouts that appear to resemble the shape of the headlights.

Ford previously confirmed the Bronco will officially return sometime next spring, although it did not specify which of the two models will be revealed or whether both will share the stage.  Reports are suggesting the smaller variant will be the first to go on sale and will be followed a few months later by the large version due to hit showrooms by late 2020.

Ford Baby Bronco Could Be Called Maverick According To Parts Catalog

Another piece of the puzzle we’re missing right now has to do with the vehicle’s name as Ford is unlikely to simply call it the “Baby Bronco.” We’ve heard rumors about the use of “Bronco Scout” or “Bronco Adventurer,” but nothing is official at this point. At least we now know for sure the Blue Oval will use “Bronco” for the smaller derivative of the boxy off-roader.

Get Up To Speed With The Baby Bronco:

As far as the oily bits are concerned, the new SUV is expected to get its underpinnings from the new Escape / Kuga, so look for a turbocharged 1.5-liter three-cylinder engine with 180 horsepower and 177 pound-feet (240 Newton-meters) of torque. A larger four-cylinder 2.0-liter mill produces 250 hp and 275 lb-ft (373 Nm) in the new Escape, with both engines linked to an eight-speed automatic transmission. Hybrid and plug-in hybrid powertrains are on the agenda for the revamped Escape, but we’ll have to wait and see whether its boxier cousin will be electrified.

With the Bronco’s long-awaited return planned for spring, we’re hoping Ford will ease the wait by releasing teasers in the months to come.