Yes, these two cars are welded together. And yes, it actually works.

Friends, it’s getting to be that time of year. Yes, all our bellies are full from holiday feasts, and there’s likely a bit of alcohol impairing the judgment of some folks out there. Combine that with the doldrums of winter in the northern latitudes, and well, you get crazy ideas like welding two perfectly good cars together for the ultimate tandem drift experience. It’s just that this time, the idea actually became reality.

That’s right, the folks from Candy Machine on YouTube picked up a pair of E46 3 Series Bimmers and stuck them together. The process obviously wasn’t nearly as simple as that – there are two build videos prior to the one at the top of this article outlining the process. In short, the cars are forever fused with several steel bars connecting them in the front, middle, and rear. The innermost wheels are removed so this Frankenbimmer still rides on just four wheels, and the inner doors are gone as well. And by using left- and right-hand drive models, the drivers can easily communicate with either.

That good, because both cars still have individual drivetrains intact, including inline-six engines and manual transmissions. Technically speaking, then, this “car” boasts 12 cylinders of German fury, and well, it takes some getting used to. By that, we mean anyone not in the car for the first test run must’ve had Jedi levels of courage to even be near the thing in motion. Meanwhile, the drivers were clearly having an absolute blast, and surprisingly, the tandem creation took the abuse in stride. In fact, after a bit of practice, this bonkers BMW actually became quite the drift machine. 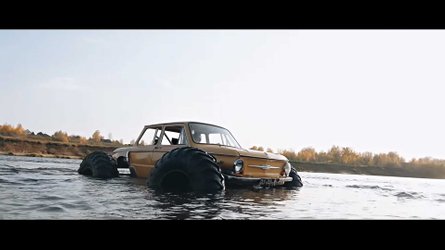 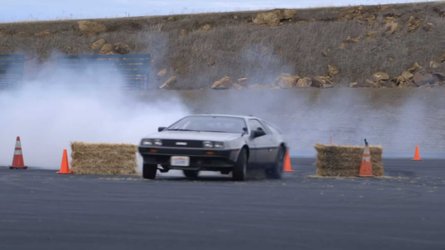 Watch This Awesome Driverless EV DeLorean Drift Like A Superstar

We’re still not sure we would’ve ventured anywhere near this car with it in motion, but the cameras inevitably move closer for the all-important glamor shots. We’ll give the drivers credit – by the end of the clip they’re able to pull off some seriously impressive precision drifting that would be tough for one person in a single car to replicate, never mind two people coordinating efforts in a vehicle that’s literally as wide as it is long.

And winter has only just begun. What other crazy automotive insanity will we bear witness to before the warming rays of spring resurrect us from the cold?