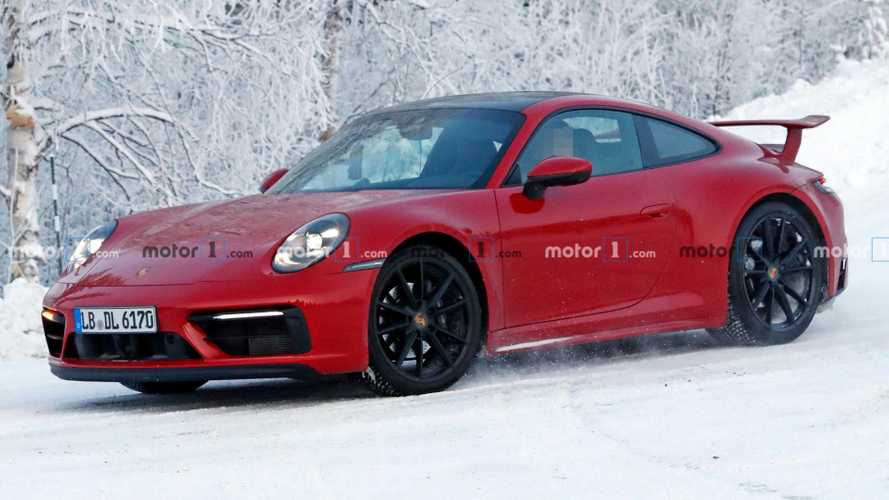 UPDATE: Motor1.com reached out to Porsche about the Aerokit. An additional minor detail is that the third brake light integrates into the rear wing. The company notes that the combination of parts adds "even more driving performance by reduction of lift on the front and rear axle," and "the engineers at Weissach have managed to create downforce even when the sunroof is in the open position, the first time this has been done at Porsche."

"Vehicles ordered from the factory with this option should arrive at dealerships in the course of the first half of 2020," Porsche spokesperson Frank Wiesman told Motor1.com. "An offering for existing vehicles via our aftersales program Tequipment is expected by summer 2020."

Yes, there's nothing new about seeing the 992-generation Porsche 911, but this one wears the optional Aerokit, which isn't yet available for delivery on the new model, according to our spies. The equipment doesn't arrive until the first half of 2020 The most noticeable addition from this package is the large, fixed rear wing on the back.

Porsche charges $6,910 for the Aerokit. It includes the elements from the $4,890 SportDesign Package adds a different front fascia with a mix of the body color for the air intakes and matte black on the C-shaped corner blades. It also includes a revised rear bumper with a body-color lower section and matte black diffuser. The big wing is the final element that separates the Aerokit from just the SportDesign Package.

The Aerokit wing has a skinny airfoil and similarly small uprights. A close recent comparison to this design is the 991.1 911 GT3, but even that design has thicker parts and endplates on the edges (see comparison below).

The Aerokit pieces dress up the new 911's appearance without going too far. If someone wants a look akin to the GT3 but either doesn't have the patience to wait for the 992 generation of that variant or simply doesn't desire the extra performance, then ticking this option box could be a good alternative.

The current Carrera S offers enticing performance from a 3.0-liter twin-turbo flat-six making 443 horsepower (330 kilowatts). Buyers can choose between rear- or all-wheel-drive layouts. There's a eight-speed dual-clutch automatic or a seven-speed manual joins the lineup for the C2S and C4S in 2020.