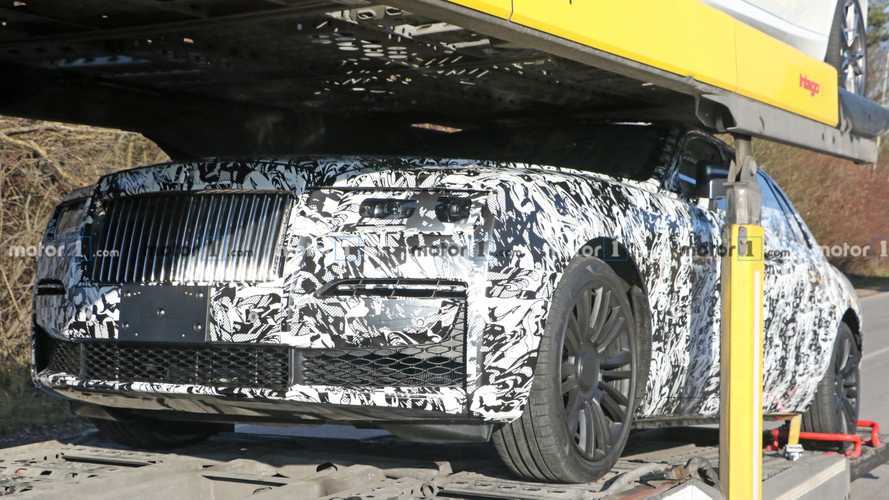 The style might be familiar, but it should be fresh and new underneath.

The new Rolls-Royce Ghost will take an evolutionary step in the design department. Indeed, even with some of the heavier camouflage now gone in this latest batch of spy shots, we can see very familiar lines for the decade-old luxury sedan but there are changes. The bold, vertical-columned Rolls-Royce grille looks a bit larger – as-is the current trend throughout the auto industry – and a restyled front fascia also incorporates larger vents.

We Saw A Ghost:

The flowing roofline endures, but the rear pillar and the side glass look a bit more upright. Camo wrap still does a good job of concealing details at the back, but it looks like this particular prototype is wearing production taillights. For that matter, the headlights are production-spec as well. Again, the design language here is that of a small, evolutionary step as opposed to something radical. In short, if you like the current Ghost, you’ll probably like the new one as well.

Beneath those subtle changes, however, is a new platform shared with the Phantom and Cullinan. The interior will also be fresh and new, sporting digital gauges in an analog-style cluster with a second infotainment screen incorporated into the middle of the dash. Rumors say the Ghost will gain all kinds of new technology as well, not the least of which being limited self-driving capability. Powertrain options aren’t known yet, but it’s thought to carry on with the big 6.5-liter twin-turbocharged V12 engine. An all-electric Ghost could also be in the pipeline.

With its current bones dating all the way back to 2010, the Ghost is certainly due for an update. The lack of heavy camouflage on this prototype, along with production-spec lights tells us a reveal is getting closer, but we haven’t heard anything thus far on even a general timeframe. We expect it will break cover at some point in 2020 for the 2021 model year.