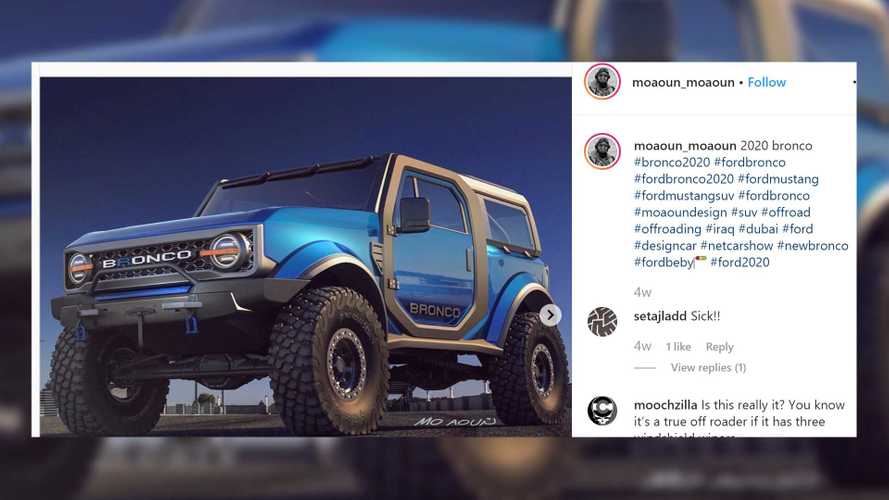 We have just a few more months until we see the real deal.

One of the biggest new vehicle debuts next year – if not arguably the biggest – will be the Ford Bronco. The covers are slated to disappear in the spring of 2020, though if it follows a similar timeline as the Shelby GT500 did, it might not be available for purchase until late in the year. The Baja-prepped Bronco R already gave us a taste of what this Blue Oval Wrangler competitor will look like, but that’s not stopping rendering artists from having a go at a potential final design.

FCA And GM Unfazed By The Ford Bronco’s Return

The latest comes from an Instagram user with the name moaoun_moaoun. It clearly draws upon the Bronco R, not to mention the rather famous teaser photo Ford released way back in early 2018, when the automaker promised a return of the fabled moniker for 2020. It also has a properly retro flavor, drawing inspiration from the first-generation Bronco for styling cues, especially in the front clip.

Is it accurate to what the production model will look like? We know the new Bronco will be properly squared-off like we see here, and while the Bronco R is certainly a radical interpretation of the production machine, the off-roader’s grille should have a similar style to what we see here. We also know it will match up closely to the Jeep Wrangler in size, and it should have similar features such as removable doors and a soft-top roof option. Underneath, the Bronco is expected to ride on a platform shared with the Ford Ranger and as such, it will probably launch with the Ranger’s 2.3-liter turbocharged four-cylinder making 270 horsepower.

Get Ready For The Bronco's Arrival:

None of this information is confirmed, and lest we forget, there’s another Bronco in the works as well. Using the Ford Escape’s underpinnings with a squared-off exterior, the compact SUV is believed to be called the Bronco Sport. Whether it debuts before or after its big brother remains to be seen, but we’ll say this much. With a new F-150 on the way and persistent rumors about the Ranger Raptor coming to America, 2020 could indeed be a banner year for four-wheel-drive Fords.