The camper is available in five sizes and has electric power to spare.

Electric cars are quickly becoming popular, but all-electric campers? Portable electric power has always been a part of the camping experience, but extended off-grid adventures typically include propane along with frugal use of electricity. Australia-based Retreat Caravans has a new offering in the works called the E-RV, and as the name suggests, it’s fully electric. Beyond that, it doesn’t require campers to be overly careful when it comes to power consumption. That’s a good thing, because the E-RV is literally jam-packed with luxury features.

You Should Rent An RV This Summer: 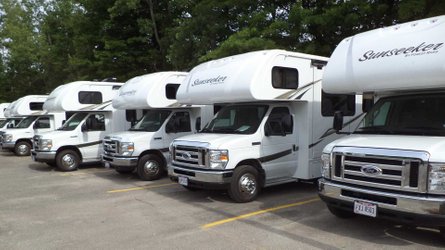 The crux of this camper trailer is, obviously, its source of electricity. A 14.3 kWh 52V battery system houses the power, with a 5,000-watt inverter delivering it to everything from an induction stove and refrigerator to a hot-water heater and air conditioning unit. In short, this kind of available power allows all kinds of items to be running simultaneously, which is one of the party tricks Retreat Caravans likes to show off at events.

Keeping the battery charged is a full bank of solar panels on the roof, which can reach up to 2,033 watts for the largest E-RV model. Power can also be generated while the trailer being towed, and yes, there is a traditional shore plug for hooking into outside power.

As for creature comforts, the E-RV doesn’t skimp. Aside from the aforementioned items, larger models can be fitted with a washing machine but even the smallest model has a full-size bed, dining area, and a full bathroom with shower. A pair of 29-gallon water tanks and a single 29-gallon grey water tank are available, as is an extra 17-gallon tank devoted to drinking water. Trailers feature off-road suspension with all-terrain tires for going properly off-grid, and buyers can choose between five different models.

Going all-electric isn’t necessarily cheap, at least when it comes to initial cost. A report from New Atlas says the E-RV will start at around $109,000 AU, which translates to roughly $75,625 in U.S. currency.