Nissan Skyline Gets Two New Looks For Tokyo: One Sporty, One Stylish 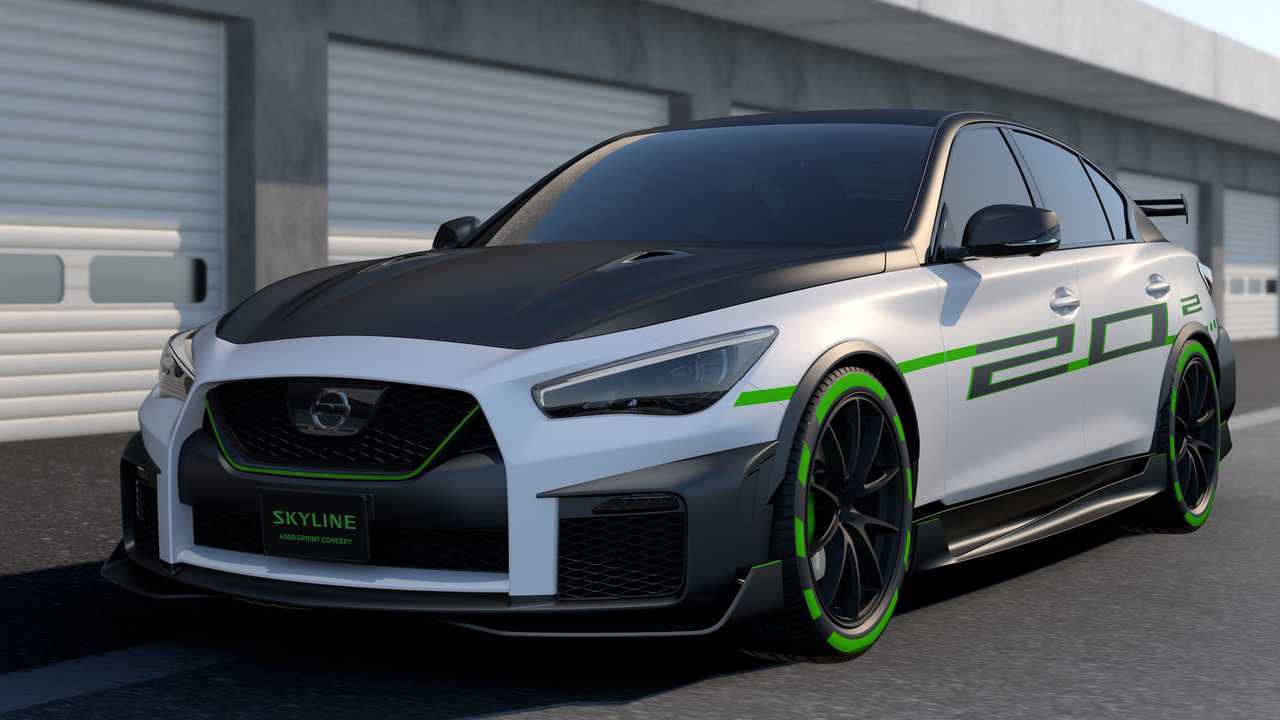 The Nissan Skyline isn't the car it once was. The Infiniti Q50-based four-door doesn't evoke the same emotion as its sporty R32 and R34 siblings once did. But in an effort to capture some (and we do mean some) of that original magic, Nissan today showed off two sleek Skyline trim levels destined for the 2020 Tokyo Auto Salon: the 400R Sprint Concept and the Deluxe Advanced Concept.

As its name implies, Nissan designed the Skyline 400R Sprint for straight-line speed. Based on the range-topping 400R model (a 400-horsepower equivalent to the Q50 Red Sport here in the U.S.), the concept features dramatic visual cues. Matte black and lime green accents cover the body and the number “20” decorates the door panels. This Skyline also rides on 20-inch forged wheels, adorns a new front and rear bumper, as well a large rear spoiler (similar to the one found on the GT-R Nismo), all contributing to the new sporty look.

But as far as we know, nothing changes mechanically. The 400R Sprint concept still uses the same twin-turbocharged 3.0-liter V6 from the traditional 400R trim, good for 400 hp (298 kilowatts) and 350 pound-feet (475 Newton-meters) of torque. Assuming this concept is just as quick as its production sibling, the Skyline 400R Sprint likely… sprints to 60 miles per hour (96 kilometers per hour) in about 4.5 seconds.

Whereas the Skyline 400R Sprint emphasizes straight-line speed and sportiness, the Skyline Deluxe Advanced hones in on the luxury-focused buyer. Equipped with Nissan's ProPilot 2.0 safety suite and a posh new two-tone leather inside, as well as a unique two-tone paint job atop high-spoke wheels on the outside, Nissan designed the Skyline Deluxe Advanced as a stylish cruiser. Though, it's unclear if this concept uses the same 400-hp engine as the 400R Sprint, or one of Nissan's other four- and six-cylinder alternatives.

The Nissan Skyline 400R Sprint and Skyline Deluxe Advanced concepts will take center stage at the 2020 Tokyo Auto Salon when doors open to the public on January 10th, 2020. But Nissan will have a whole host of other vehicles on display, as well, including the 50th Anniversary Edition trims of the GT-R and Fairlady Z (or, 370Z), a special NV350 van, and a handful of other Nismo models.