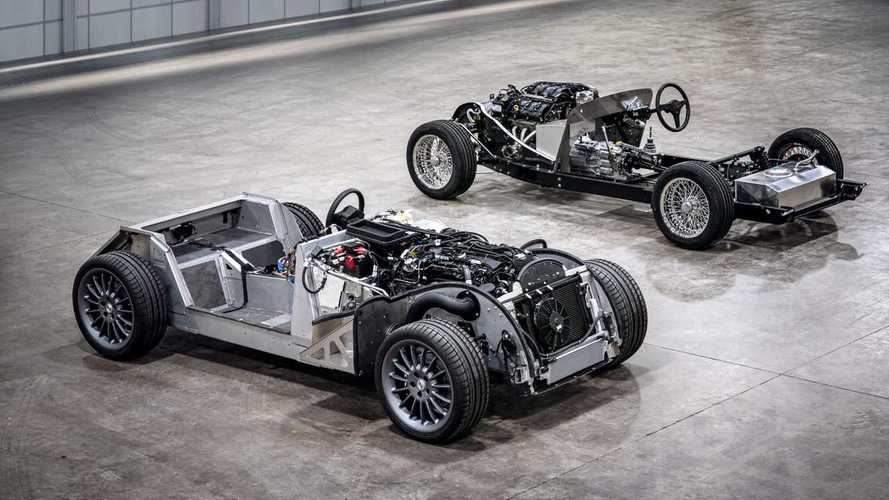 Things don't change quickly at the Morgan Motor Company, so the company adopting the new CX-Generation aluminum platform to replace its old steel chassis is a big deal. The lightweight underpinnings are already on the new Plus 6, and the transition for other models begins in 2020. To put this change into perspective, the basis for the steel chassis dates back to 1936 and is still underneath the 4/4, Plus 4, and V6 Roadster.

"The CX-Generation aluminum platform represents a significant undertaking for a small company like Morgan. Following the success of the platform and the Plus Six earlier this year, I am delighted that we can finally reveal further plans for new models in 2020," Steve Morris, CEO of Morgan Motor Company, said in the expansion's announcement.

Morgan previously used an aluminum chassis on the Aero 8 and second-generation Plus 8. In comparison, the CX-Generation platform twice as rigid and weighs just 97 kilograms (213.8 pounds).

Morgan Bids Farewell To The V8

For now, Morgan isn't offering details about the arrival of new models riding on the CX-Generation platform arrive. However, the company confirms the vehicles are available with a manual gearbox and an engine that's smaller than the 3.0-liter inline-six from the new Plus Six.

Using the latest Plus Six as a guide, don't expect the new Morgan models to look much different than the company's established products. A long hood, circular headlights, and short deck are now the classic proportions for a four-wheeled Morgan. With the Plus Six adopting a BMW-sourced engine, the other upcoming products could use the German powerplants, too.

It's worth noting that the old steel chassis isn't dead yet. Until the new vehicles' arrival, the existing products continue to use the long-lived underpinnings.

Morgan confirms plans for additional models in 2020, underpinned by its CX-Generation aluminium platform

The CX-Generation platform was introduced in the Morgan Plus Six, launched at the Geneva Motor Show in March 2019

2020 will mark the end of production for the traditional steel chassis, a variation of which was introduced in 1936 and is currently used in the Morgan 4/4, Plus 4 and V6 Roadster

The 2020 Morgan model line-up will feature a manual gearbox within the range, for the first time in a CX-Generation model

New models will feature smaller capacity engines than the 3.0 litre inline six-cylinder engine in the Plus Six

The Morgan Motor Company is to continue its technology drive with the launch of new models based on its recently introduced CX-Generation aluminium platform. The new car introductions will take place in 2020 and form a core range of models for the British manufacturer.

It follows the success of the first car to use this platform, the Morgan Plus Six. Launched at the Geneva Motor Show in March 2019, it has received an overwhelmingly positive reaction from both the press and customers, in large part thanks to its CX-Generation platform.

Designed in house by Morgan, the CX-Generation platform is twice as rigid as the previous aluminium chassis used by the company, which underpinned the Aero 8 and second-generation Plus 8 models. Thanks to a focus on reducing weight, it tips the scales at just 97kg, contributing to the Plus Six’s mere 1,075kg dry weight.

Although full details of the new CX-Generation aluminium platform models are yet to be shared, the company can confirm that the range will feature a variant with a manual gearbox, as well as an engine with a smaller capacity than the 3.0-litre turbocharged inline six-cylinder unit used in the Plus Six.

The launch of new CX-platform-based cars in 2020 will mark the end of production for Morgan’s legendary traditional steel chassis. Introduced in 1936 in Morgan’s first four-wheeled vehicle, the 4-4, the steel chassis has played a hugely important role in the company’s history, underpinning its models for 83 years. A variation of the chassis continues to be found today, in the Morgan 4/4, Plus 4 and V6 Roadster.

Morgan has not confirmed an official end date for production of the traditional steel chassis models but recognises a period where it will be produced alongside CX-Generation models before its discontinuation in 2020.

Steve Morris, CEO, Morgan Motor Company, said “The CX-Generation aluminium platform represents a significant undertaking for a small company like Morgan. Following the success of the platform and the Plus Six earlier this year, I am delighted that we can finally reveal further plans for new models in 2020.

We recognise a need for a more resolved core product that fits in with our customer’s growing needs, as well as future legislative requirements. The advanced engineering encompassed within the new platform is a vital underpinning for the next generation of Morgan sports cars, and further demonstrates the exciting blend of craftsmanship and technology that makes Morgan cars unique.