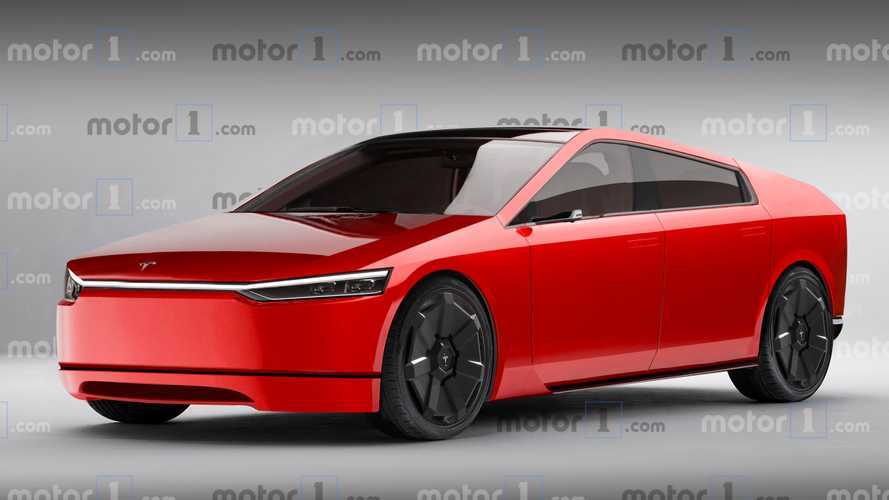 Tesla may be onto something with all those sharp edges.

Tesla shocked the world when it revealed the Cybertruck last month. The hard-edged, stainless-steel exterior, and sharp angles aren’t something we see every day. The truck feels like an 80s sci-fi extra that wandered off a studio lot mistaken about what year it is. But there’s no doubt the controversial design has made its rounds online and off. A new rendering takes the truck’s angular styling and shrinks it to fit on the Tesla Model S, and it doesn’t look terrible.

One of the truck’s most striking features is the triangular and pointed roof that comes to an edge point over the cabin, and it fits well on the smaller Model S. The roof’s highest point is just above the front passengers, providing plenty of headroom. However, the same can’t be said for the rear passengers. The truck’s longer wheelbase means the sloping roof still provides plenty of headroom for those passengers. The Model S has a shorter wheelbase, making the roof’s slope far greater than that of the truck.

The Model S also adopts the truck’s flat front end. There’s no need for a traditional grille on an electric vehicle, so Tesla doesn’t stick one on – and neither does this rendering. The Model S rendering takes the truck’s thin headlights and turns them into something far more likely to appear on a production vehicle. The thin lighting strip looks great, but it alone cannot meet federal safety standards.

The Model S doesn’t have a perfectly triangular profile like the truck, which is one design difference between the two. The greenhouse doesn’t feature the same slope angles as the car’s hood, cascading down the front of the car with a gentler slope. We can’t see the rear, but it’s likely a liftback, which should provide plenty of cargo space.

It’s doubtful Tesla will revamp its entire lineup based on the Cybertruck’s styling. For one, it’s a polarizing design, which is great for headlines, but rarely great for sales. Though, if Tesla decided to sharpen it’s design, an angular Model S wouldn’t be terrible to look at.