Sometimes, you might feel less of a jolt in the cabin by not slowing down so much.

Among the regular features from the Warped Perception channel is an effort to see how much punishment a thoroughly used Mercedes-Benz E-Class can take. After taking the sedan over some of the worst potholes in Chicago, the new effort shows what various types of speed bumps do to a vehicle's suspension. For a better look, the camera films the action in slow motion.

Gallery: Watch What Hitting A Speed Bump At Full Speed Does To Your Car

After a thorough detailing, which seems pointless on a vehicle for no doors or bodywork, the torture test begins. The first challenge is an asphalt speed bump. These are a familiar sight in residential areas, but Warped Perception shows that this design has some weaknesses. If someone slams on the brakes at the top of the hump, then, at the right speed, the car can slam down on its front end. Alternatively, speeding up over these obstacles lets the suspension float over them and actually reduces the jolt to the suspension.

We have a complaint about the next test. Generally, Warped Perception works in an abandoned area or at least has a spotter keeping an eye out for oncoming traffic. Here, he's in a crowded parking lot, and someone even honks at him on the video. There's nothing wrong with having some fun, but don't put other people in danger for a YouTube video. This evaluation of the small speed bumps in commercial parking lots is also the most boring of the bunch. 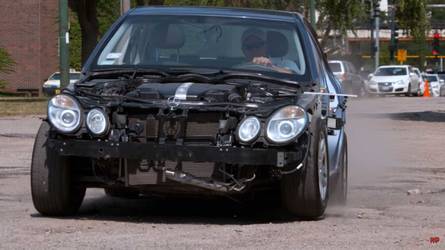 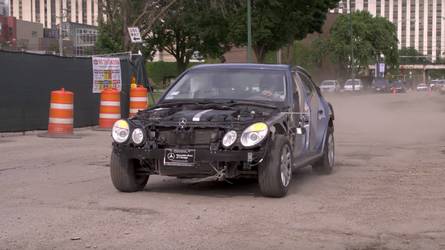 Someone Tried To Deploy E-Class’ Airbags By Hitting Potholes Hard
⠀ 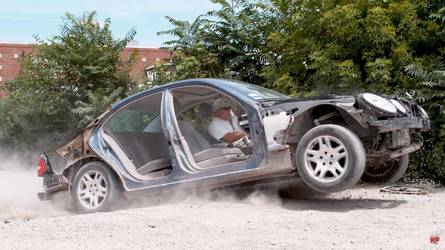 Finally, there's an evaluation of the aggressive speed bumps that force significant reductions in speed without causing a major jolt to the vehicle's occupants. Since this is the most interesting of the bunch, watch the video to see the results. Despite the punishment, the Mercedes is still able to drive away, which is a testament to the toughness of these old E-Class models.