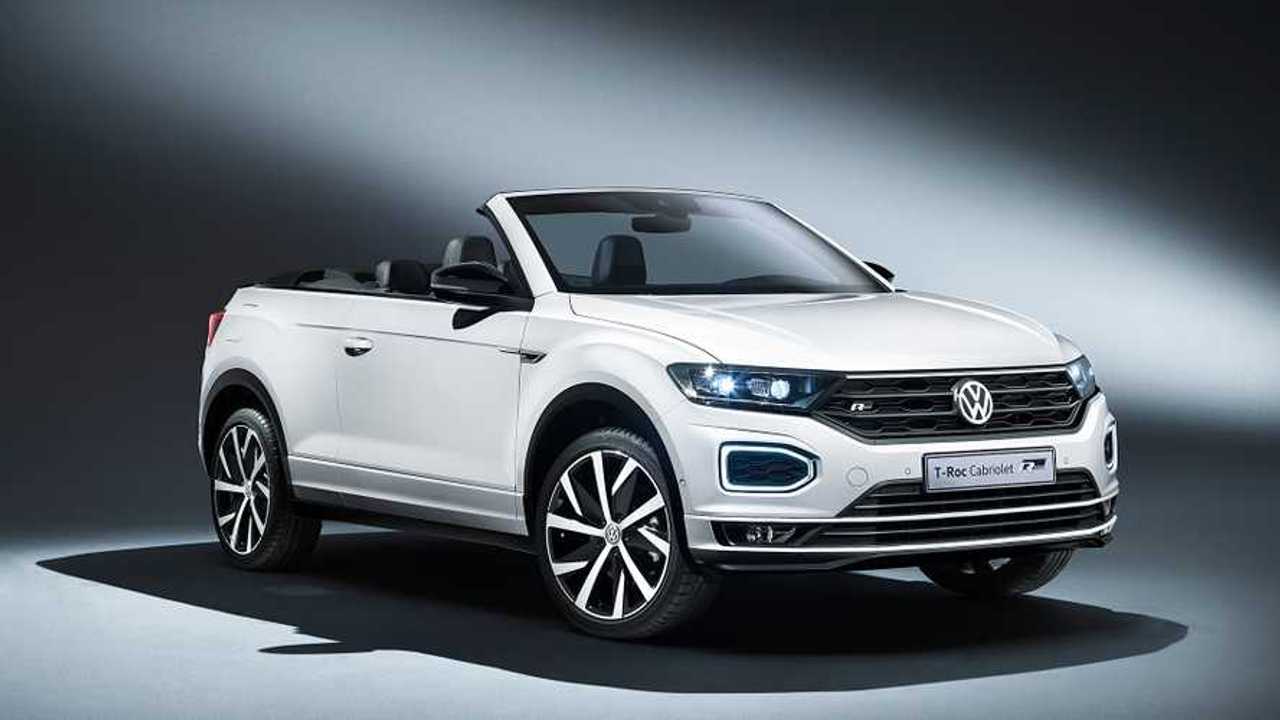 It’s built at the same factory as the Porsche Cayman.

Volkswagen will build the T-Roc Cabriolet at its multi-brand plant in Osnabrück, Germany, where VW Group also builds the Porsche Cayman. The T-Roc cab is an expansion of the T-Roc lineup, which already includes your typical four-door crossover variant. VW debuted the new crossover in November 2017, giving the brand a subcompact offering as the segment continued to grow.

The T-Roc Cabriolet is more about style than offering the versatility you'd expect from a crossover. Power, which comes from either a 114-horsepower (85-kilowatts) turbocharged 1.0-liter three-cylinder or a 148-hp (110-kW) turbocharged 1.5-liter four-cylinder, only goes to the front wheels. A six-speed manual is standard, though customers can upgrade to the seven-speed, dual-clutch automatic gearbox.

Power and performance are not the T-Roc Cabriolet's forte. It's about style, and the VW has plenty of that. The soft top can open in nine seconds at speeds up to 19 miles per hour (30 kilometers per hour).

VW offers the cabriolet in one of two design packages – Style and R-Line. The Style offers 17-inch wheels, ambient lighting, and an available leather interior package. The R-Line adds upscale niceties such as fog lights and fabric and leatherette sport seats. It, too, comes with 17-inch wheels, though 19-inch ones are optional. Options include a Beats audio system, an 11.7-inch digital gauge cluster, and more.

Production of the T-Roc Cabriolet begins in Osnabrück

Production of Volkswagen's new T-Roc Cabriolet starts today at the Osnabrück plant. The plant's facilities, including the production and logistics operations, were extensively optimised in advance for the Volkswagen brand's only convertible.

At the ceremonial start of production in front of staff at the plant today, Andreas Tostmann, Volkswagen Management Board Member for Production, said: “The vehicle was in large part developed in Osnabrück. Now it is being produced here too. It is a genuine child of the site. A site that in the process has been able to fully demonstrate its strengths.” He continued: “The team did a lot of work to bring the T-Roc Cabriolet here and are now finally reaping the reward for their efforts. Production, assembly and logistics have been extensively modernised for a high double-digit million euro amount and are of an excellent standard.” Tostmann went on to stress Volkswagen's ongoing commitment: “Over the next five years too we will be investing further in the site on a similar scale – predominantly in the production of the T-Roc Cabriolet.”

Jörg Müller, the management team spokesperson, said: “We’ve got a long tradition of making convertibles here at the Osnabrück site. It’s one of our core areas of expertise.” He continued: “The entire team is proud to have the privilege of making the Volkswagen brand's only convertible. We worked hard for it.”

The T-Roc Cabriolet is the soft-top variant of the successful Crossover T-Roc, which was added to the Volkswagen brand product portfolio in November 2017. The new convertible with SUV genes offers a striking design, elevated seating position and high level of functionality. Open-air enjoyment starts at the press of a button, with the soft top opening in just nine seconds.

In addition to the T-Roc Cabriolet the multi-brand Osnabrück plant also produces the Porsche Cayman.