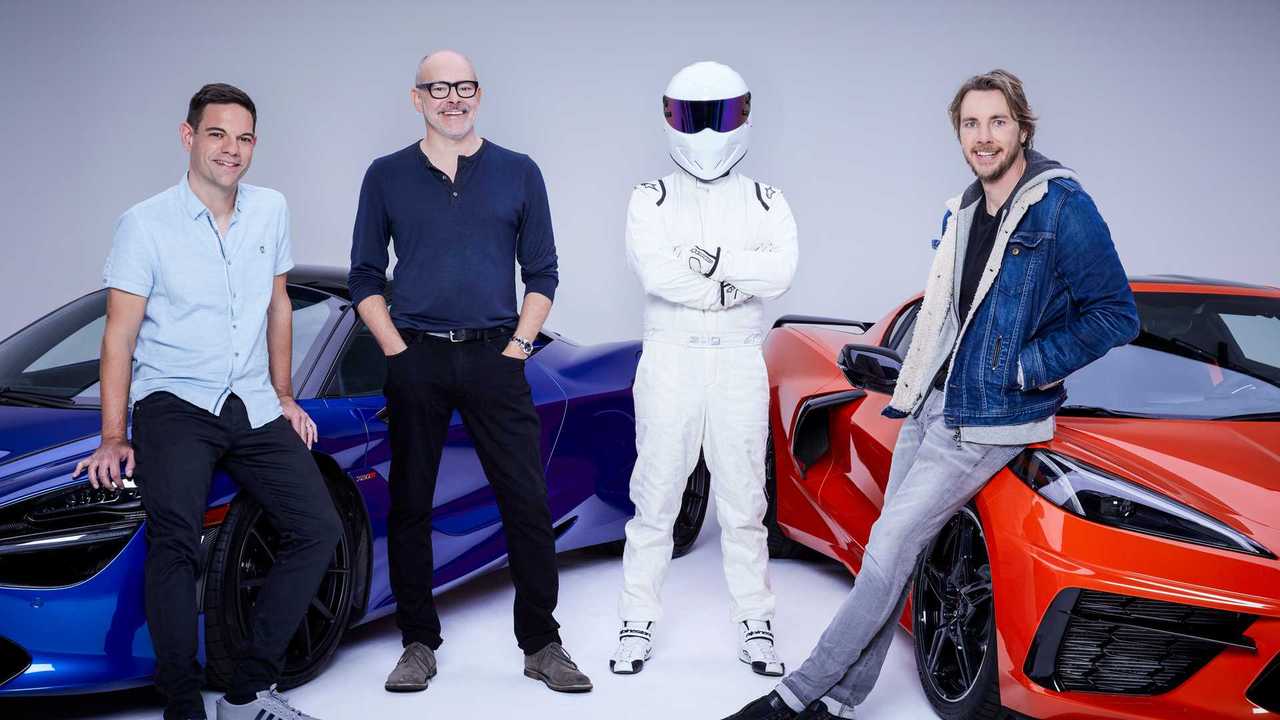 Top Gear is a worldwide phenomenon. The original show is legendary, delivering motoring fun in its current form to the masses since 2002. The show’s popularity has spawned country-specific spinoffs such as Top Gear France, Top Gear Russia, and Top Gear Korea, to name a few. The U.S. has had not one, but two iterations of the popular show, and we’re about to get a third. MotorTrend Group and BBC Studios are partnering to revive the show with three new hosts that will air exclusively on the MotorTrend App, the company’s streaming service.

While the show's car content matters, TGA will only be as good as the chemistry between the three hosts – Dax Shepard, Rob Corddry, and Jethro Bovingdon. Oh, and The Stig. Shepard is best known as Kristen Bell’s husband, though he has a stack of acting credits – CHiPs, Hit and Run, Netflix’s The Ranch, and more. Corddry, who has four Emmys and a Peabody, found fame on The Daily Show with Jon Stewart while starring in shows such as Arrested Development, Community, and Curb Your Enthusiasm.

Watch Some Motoring Fun Until The Show Arrives:

Top Gear Shows You How To Start A Rally Car
⠀

Watch Chris Harris Be Baffled By The Toyota Supra

Bovingdon is the automotive journalist of the bunch with more than 20 years of experience with wheels, pens, and cameras. He’s written for CAR, EVO, and others, and has played host for Car and Driver. His experience goes beyond writing about cars – he races, too, winning his class three times in the 24 Hours of Nurburgring race.

This is BBC’s third attempt to make a U.S. version of Top Gear a success. The first show starred Adam Ferrara, Tanner Foust, and Rutledge Wood. While the show had a rough start, it aired for six seasons and 72 episodes before getting the ax. When the show ended in 2016, the three hosts and their on-air antics had found their stride, but it wasn’t enough to save the show. Top Gear America followed in 2017 with Antron Brown, William Fichtner, and Tom Ford. The show lasted for one season and eight episodes.

The new Top Gear America will start streaming through the MotorTrend App next spring. The new show will join the app’s endless Top Gear content that includes more than 170 episodes of Top Gear UK, all the available Top Gear UK specials, three seasons of Top Gear: Extra Gear, and Richard Hammond's Crash Course and James May’s Cars of the People. The MotorTrend App requires a $4.99 a month subscription.

(Los Angeles) – MotorTrend Group, a Discovery company, and the Los Angeles production office of global content leader BBC Studios, proudly announced today that Dax Shepard, Rob Corddry and Jethro Bovingdon have signed on to host the all-new U.S. format of TOP GEAR, TOP GEAR AMERICA. Premiering in the spring of 2020 exclusively on the MotorTrend App, the only subscription streaming service dedicated entirely to the motoring world, the new TOP GEAR AMERICA will deliver a fresh, uniquely American take on the classic TOP GEAR format, and follow the motorized mischief and supercharged adventures of Dax Shepard, Rob Corddry and Jethro Bovingdon across America.

“What an extraordinary trio to add to the storied history of the TOP GEAR franchise,” said Alex Wellen, global president and general manager of MotorTrend Group. “Individually Dax, Rob and Jethro bring unique experiences, perspectives and genuine passion for the automotive world. Together they create all the essential and joyful ingredients that we’ve come to love about TOP GEAR – comradery, competitiveness and sheer curiosity. We can’t wait to share their exhilarating adventures as they traverse American car culture with each new episode of TOP GEAR AMERICA.”

“We’re thrilled that the U.S. fans of our global franchise will be able to continue to relish in all that is TOP GEAR—excitement, fun and passion. The clear chemistry between Dax, Rob and Jethro, in combination with the challenges and car stunts – ranging from the ordinary to the extraordinary – are certain to make TOP GEAR AMERICA a new fan favorite,” added Matt Forde, Managing Director, International Production & Fomats, BBC Studios.

Dax Shepard is a lifelong gearhead who grew up in Detroit and was raised by a single mother working in the automotive industry. As the owner of a 1967 Lincoln Continental, a 1994 Buick Roadmaster Estate Wagon, a Mercedes AMG E63 and several on-road and off-road motorcycles, Shepard’s deep passion for the car world is not only reflected in his hobbies but also in his art. He is the writer, director and star of “CHIPS,” about two motorcycle highway patrolmen, and “Hit and Run,” about a getaway driver who goes on the lam in order to save his girlfriend. In addition to his film credits, Shepard played Crosby Braverman on seven seasons of “Parenthood” and is currently starring in three television series: Netflix’s “The Ranch” opposite Ashton Kutcher and Sam Elliott; the ABC sitcom “Bless This Mess” with Lake Bell; and as the host of the FOX game show “Spin the Wheel.” Last year, Shepard launched “Armchair Expert,” a podcast in which he talks with some of the most iconic, creative personalities around the world. “Armchair Expert” was the most downloaded new podcast of 2018.

Four-time Emmy award-winning actor, producer and comedian, and Peabody Award-winning fake journalist, Rob Corddry has been a car enthusiast since his teens when he learned how to drive in a blue 1980s Chevy Celebrity wagon. His love for cars grew after driving to the beach every night in his buddy Jeff’s 1965 Mustang held together with bondo. He bought his first car, a white 1975 Ford Pinto wagon with woody walls and rusted out floorboards, for five dollars from a family friend. Having driven some of the coolest rides for five seasons on the hit HBO series “Ballers”, Corddry loves driving his 2018 Porsche 911 S, a 1978 Datsun 280z and is “merely fine” driving his boring Lexus RX 350. Corddry is best known for his work on Adult Swim’s satirical comedy series “Childrens Hospital”, which he created, executive produced and starred in. He recently wrapped production on Netflix’s “Medical Police”, a “Childrens Hospital” spin-off series premiering January 2020, and can currently be seen in the CBS comedy, “The Unicorn”. Corddry was a correspondent on “The Daily Show with Jon Stewart” from 2002 to 2006 and starred in other TV series including “Speechless”, “Happy Endings”, “Arrested Development”, “Community”, “Curb Your Enthusiasm” and more. Additionally, he has starred in several feature films including “Dog Days”, “Hot Tub Time Machine”, “Office Christmas Party”, “Seeking a Friend for the End of the World” and many more.

Jethro Bovingdon is one of the world’s most respected automotive journalists, having spent more than 20 years behind the wheel for many of the industry’s most influential media outlets including CAR, evo, DriveTribe, Automobile and MotorTrend. Besides being a skillful writer and analyst, Jethro is also one of the fastest car journalists on the planet, having won his class three times in the grueling 24 Hours of Nürburgring endurance race. Bovingdon brings a British respectability and sophistication to what is sure to be an otherwise raucous and uniquely “American” take on TOP GEAR.

The upcoming season of TOP GEAR AMERICA will premiere in the spring of 2020, and will be part of the MotorTrend App’s ultimate collection of TOP GEAR content which includes:

TOP GEAR is the world’s biggest motoring entertainment show. The original British version of the show debuted in its current format in 2002, and has reached an estimated audience of 350 million viewers worldwide in more than 200 territories. Across its 25+ seasons the show has thrilled viewers globally with its unique blend of entertainment, humor and car knowledge. TOP GEAR is a fast-paced and stunt-filled automotive show that tests whether cars, both mundane and extraordinary, live up to their manufacturers’ claims. The long running series travels to locations around the world, performing extreme and often utterly pointless stunts and challenges to see what the featured cars can do and how much fun you can have with them. Celebrities including Tom Cruise, Cameron Diaz and Will Smith have all appeared as guests in a regular segment where they set a lap time on the famous TOP GEAR track in an ordinary, everyday car. Jeremy Clarkson, Richard Hammond and James May hosted TOP GEAR (UK) for more than a decade before giving way to a new crew in 2016. Matt LeBlanc hosted the show for four seasons before handing over to the current line-up of Paddy McGuinness, Freddie Flintoff and Chris Harris.

The MotorTrend App offers nearly 8,000 episodes and roughly 4,000 hours of world-leading automotive series and specials including the most complete collection of classic TOP GEAR (200+ episodes and specials spanning seasons one thru 25), and every season of WHEELER DEALERS, ROADKILL, FAST N’ LOUD, GARAGE REHAB, OVERHAULIN’, BITCHIN’ RIDES and many more. The MotorTrend App is available for Prime Video customers in the U.S. on Prime Video Channels and on Amazon FireTV in addition to other media players and streaming devices including the Facebook video subscription service, Apple TV, Roku, Google Chromecast and on the web, as well as across iPhone, iPad, and Android mobile devices.