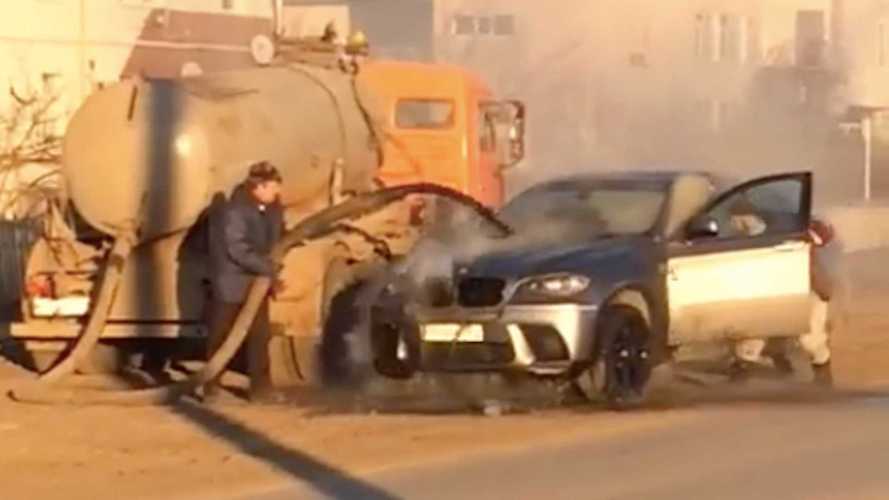 Talk about videos you could smell.

I think we can all agree that an engine bay engulfed in flames is one of the worst things that could happen to your car – apart from a total wreck, of course. Well, the former was exactly what happened to the owner of this BMW in Romania.

In a Facebook video that has since become viral, a BMW is parked on the side of the road, hood open, and with unwanted smoke and flames coming out of the engine bay. The engine is literally on fire, but that's not what made this story special.

Apparently, the driver of the BMW was so desperate in stopping the fire that he sought help from a septic truck that was on site when the incident happens. Yes, a septic truck, and I'm pretty sure you know what kind of liquid (or solid?) these trucks carry on their tanks.

As seen in the video above, the driver of the septic truck complied and helped the troubled BMW owner, using its hose to spray its nearly-black fecal content on the burning engine bay of the man's prized possession. Of course, the fire went out, but we can only imagine the smell while this whole ordeal was happening. Really, this is one of those videos that you could smell just by watching.

Watch This Ford Get Pummeled By Freak Hailstorm In Australia

We completely understand the desperation that the driver felt in this incident. We would have done the same, too, instead of waiting for the fire department to arrive. But would you have done the same if you were in his place? Let us know in the comments section below.