When it comes to ultra-fast and ultra-expensive, Bugatti is arguably at the top of the list. Their production cars have broken records at the track and the bank, always selling to buyers who purchase subtly, placing orders ahead of time, even before the car they want makes it into official production. The revival of the "La Voiture Noire", or the black car, was shown off earlier this year in March, and was a modern interpretation of the special Type 57 SC Atlantic that was built in the years 1936 and 1938. There was so much interest in the "La Vioture Noire" that Bugatti has decided to offer its customers two special editions of the Chiron in the same theme;  the “Noire Sportive” and the “Chiron Noire Élégance”.

The more elegant "Chiron Noire Élégance" has its exterior finished in black exposed carbon fiber. A solid silver Bugatti "Macaron" emblem sits on a redesigned front grille. The dark theme continues down to the brake calipers, which sit behind a new set of "Caractère" wheels. Then there's the C signature line that's milled from solid metal and finished in matt polished aluminum that visually adds contrast to the black body of this Chiron. The carbon fiber continues to the rear-view mirror and engine cover, and the "Noire" inscription can be found in the side panels and the underside of the rear wing. On the inside, the black theme continues, with the lit up C-line being made of aluminum, adding some visual flair. The "Noire" inscription is also found in the door sills, console, and headrests, together with badging that demonstrates the exclusivity of each edition car. The Bugatti “Chiron Noire Sportive” has a matt finish for its exposed carbon fiber body, while the exterior elements such as the exhaust, wheels, spoiler, grille, and signature line are all in matt black. The inside of this edition is even more black than the “Chiron Noire Élégance”, with all the inscriptions and aluminum parts finished in matt black.

Bugattis Don't Deserve To Be Stored In Garages: 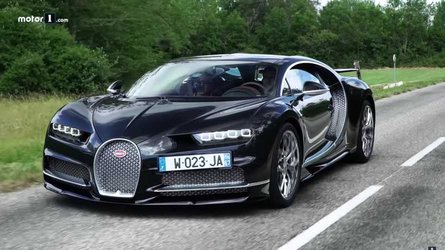 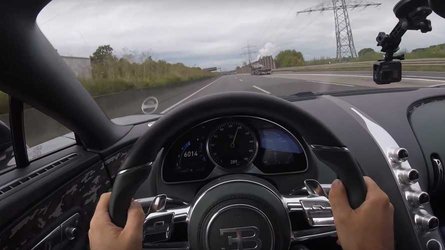 Bugatti Chiron Was Born To Devour Miles On The Autobahn

Whichever one you get, you still have the powerful quad-turbocharged 8.0-liter 16 cylinder engine that makes 1,500 horsepower and 1,180 pound-feet of torque. These limited models will be restricted to just 20 units, and will be delivered from the second quarter of 2020 with a starting price of $3,305,445.