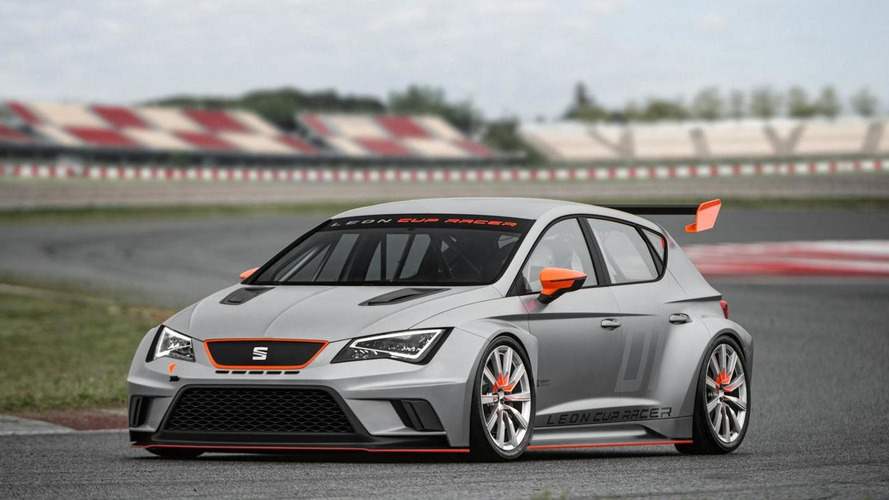 Seat will showcase at Wörthersee this month the Leon Cup Racer which will be offered to customer teams for the 2014 season.

Seat will showcase at Wörthersee this month the Leon Cup Racer which will be offered to customer teams for the 2014 season.

It's based on the five-door Leon and wears a metallic matte grey paint with orange accents. The racer sits on 18-inch racing wheels and comes with a series of modifications such as wider tracks, flared sills, muscular wheel arches, two-phase roof spoiler and a smooth underbody.

Inside it gets a minimalistic configuration to lower curb weight as much as possible and was fitted with a roll cage, bucket seats with HANS system, TFT display and a multi-function steering wheel.

At its heart is a 4-cylinder, 2.0-liter turbocharged engine rated at 330 HP (243 kW) and 350 Nm (258 lb-ft) of torque. Power is transferred to front wheels through a six-speed DSG and an electronically-controlled differential lock. The Leon Cup Racer is also offered with a sequential racing transmission with a center console-mounted shift lever and a mechanical differential lock.

DSG-equipped model starts from 70,000 EUR, while the more extreme version begins at 95,000 EUR. Both prices do not include VAT.

Jaime Puig, Head of Seat Sport and in charge of the firm's motorsport activities, says "we expect to be able to offer the Leon Cup Racer to our customer teams as early as the 2014 season." He added "we can also envisage further developing the Cup Racer to create a WTCC version with a 1.6-liter engine."

Check out the attached press release for further info.