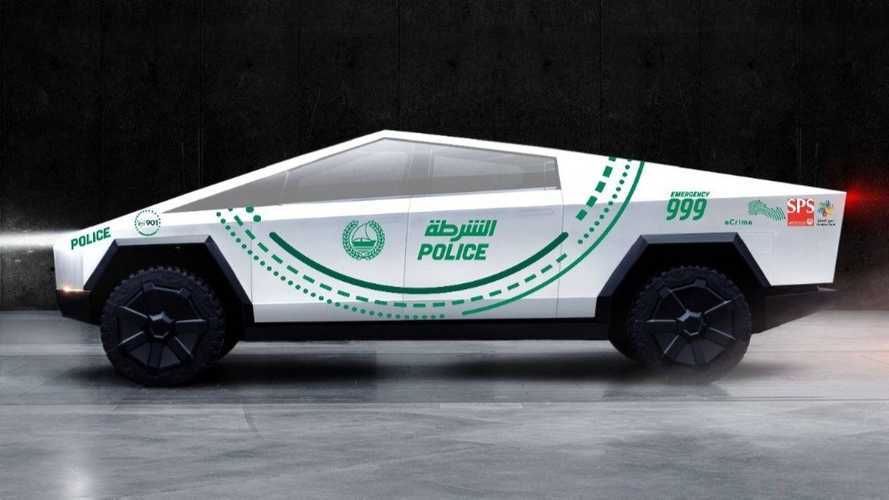 Why are we not surprised?

If you’re a police officer with a soft spot for supercars, the best job for you would be in the most populous city in the United Arab Emirates as Dubai’s police fleet has all the expensive toys. That includes a mighty Porsche 918 Spyder and the all-conquering Bugatti Veyron, along with a super-rare Aston Martin One-77 and a Ford Mustang modified by Roush. We could go on forever by mentioning a Lamborghini Aventador, an Audi R8, and even a Renault Twizy just for kicks. Wondering what’s next? The Tesla Cybertruck, of course.

The Dubai Police published this week an image of the all-electric pickup truck carrying the appropriate livery applied to all the high-end vehicles mentioned above. While the tweet says the Cybertruck will join the fleet in 2020, that’s not actually going to be the case since production of the base and midrange models won’t kick off until late 2021. The flagship tri-motor model is scheduled to hit the assembly line at the end of 2022.

In an interview with Arabian Business, Dubai Police Major General Abdullah Khalifa Al Marri revealed the Tesla Cybertruck is going to serve as a patrol car in areas where there are lots of tourists. It’s unclear at this point which version they have ordered, but we have a feeling it’s the range-topping $69,900 tri-motor that does 0 to 60 mph in 2.9 seconds and offers 500 miles of range.

Cybertruck In The News:

The announcement about making a $100 refundable deposit for the Cybertruck was made only days after the Dubai Police revealed it would also buy a Mercedes-AMG GT 63 S, so it’s safe to say Tesla’s truck will be in some good company. The order placed by the police authorities in Dubai is one of the 250,000 deposits Tesla has received so far from potential customers in just a week following the vehicle’s unveiling in Los Angeles.