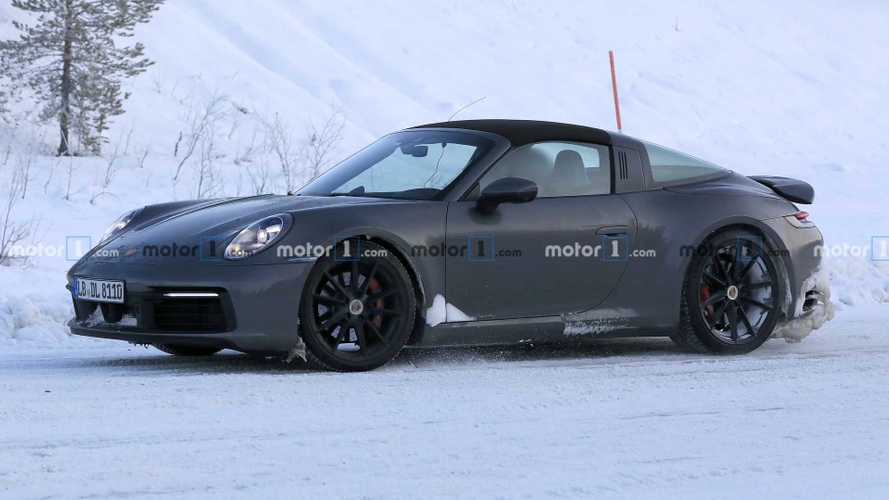 The removable roof is firmly in place, for obvious reasons.

[UPDATE, November 29] 19 new spy shots added to the gallery, below.

We don’t know how many Porsche owners venture into the cold with their 911, never mind one with a removable roof. Honestly, we hope more people have a go in the snow than not, because cars were meant to be driven and winter driving can be rewarding in its own way. Regardless, Porsche needs to make sure its roofless models are prepared for all weather conditions, which is why we see the forthcoming 911 Targa tackling snowbound roads north of the Arctic Circle.

It’s certainly not the first time we’ve seen the soft-top Targa out and about, but it is the first winter testing session we’ve caught on camera. Actually, with a majority of the 911’s weight on the rear axle its quite good in the snow – provided you have a set of snow tires. That said, the new Targa should offer all-wheel-drive as per the current model, though we can’t help but notice a rather prolific build-up of snow at the rear of this test car. Could rear-wheel-drive be available for the new model?

Aside from that intriguing possibility, rumors of a 911 Turbo Targa are swirling as much as the snow off the back tires in these photos. We aren’t simply talking about a turbocharged engine – which you’ll find in the Carrera range anyway – but rather the dedicated high-performance Turbo trim. If that holds true, the Targa could be had in a variety of power flavors ranging from 379 horsepower (283 kilowatts) to something well over 600 hp (447 kW). We say something because the new 911 Turbo is still testing as well, and its final power figure hasn’t been confirmed. Suffice it to say, the Turbo Porsche will be exceedingly fast, and we rather like the idea of having a proper Targa model in the mix.

With Porsche’s lack of camouflage on its test vehicles, we’ve basically seen the Targa already. Still, small design details remain hidden and stats still need to be confirmed. We don’t have a definitive timeframe for an official reveal, but it should happen sometime next year, possibly in the second half of 2020 after the 911 Turbo’s debut.