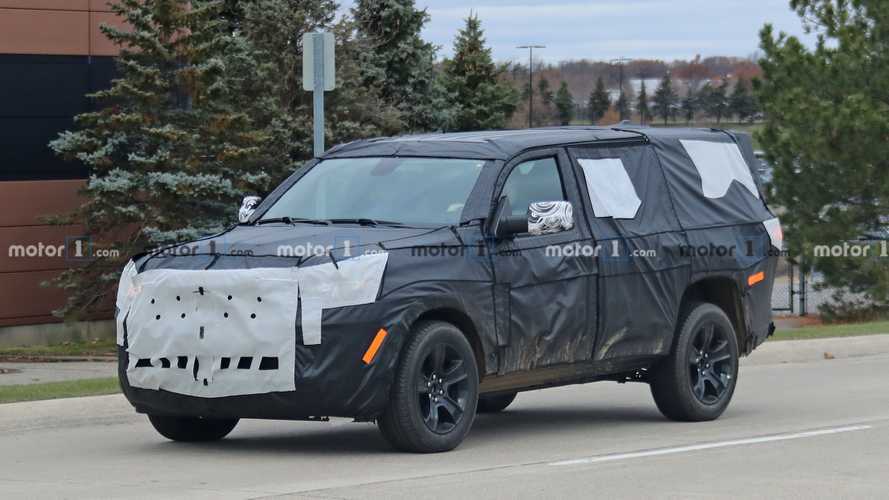 The Jeep Wagoneer and Grand Wagoneer, the brand’s pair of three-row flagships, are real. After years of rumors, and more than a few false appearances on Fiat Chrysler Automobiles' product roadmap, we have our first spy photos of the new Jeep model. And we can’t see much.

The Jeep Wagoneer spy photos show the large SUV hiding under thick black camouflage that distorts the design underneath. The headlights and taillights are adequately covered, as is the grille. It has a boxy shape, but the disorientating camouflage hides the exterior’s details. There are no spy photos of the interior; however, it is based on the Ram 1500, so it could be similar to the new truck.

Here's What We Know About The Jeep Wagoneer:

The Wagoneer should use the same powertrains available in the Ram 1500. That includes the 3.6-liter V6 along with the V6 paired with Ram’s 48-volt, mild-hybrid system. The Ram’s 5.7-liter V8 should also power the Wagoneer when it arrives.

Jeep is preparing to launch two models with the Wagoneer name – the entry-level Wagoneer and the upscale Grand Wagoneer. While the standard three-row Wagoneer will compete against the Ford Expedition and GMC Yukon, the Grand Wagoneer will go head-to-head with the likes of the Lincoln Navigator and Land Rover Range Rover. Expect the pricing of both to be competitive.

The Jeep Wagoneer is a model we’ve heard a lot about for years, and yet have seen little materialize. Murmurings of a large, three-row Jeep date back to at least FCA’s 2011 roadmap that showed a Grand Wagoneer as a worthy Jeep Commander replacement. The Grand Wagoneer reappeared on FCA’s 2014 roadmap, slated for the 2018 model year, and FCA gave the Wagoneer and Grand Wagoneer the green light in 2017. Except 2018 came and went with the Wagoneer nameplate still on the roadmap.