Not a fair race, really.

What makes a good race? A tight lineup of vehicles with similar performance? Drivers of equal skill levels? Or a track that suits the type of vehicles that will be competing? Maybe all of the above? In this video by DriveTribe, it's an extremely muddy off-road race as Mike gets behind the wheel of a Jeep Wrangler Rubicon. His goal it to take on motoring legend Tiff Needell, who happens to be in the driver's hatch of his very own armored vehicle. Fair fight? Maybe, if the whole episode wasn't sponsored by Jeep to begin with.

So, needless to say, it's pretty clear who's going to take the checkered flag. That doesn't mean that the Jeep Wrangler isn't a capable opponent against the armored vehicle, what with legendary 4x4 capability and a range of 2.0-liter and 2.2-liter turbocharged gasoline or diesel variants in the United Kingdom. Sure, they don't get the punchier V6 mills like in the United States, but having 272 horsepower and 295 pound-feet of torque out of a turbocharged 2.0-liter is still enough to conquer most trails. If we wanna get into it, the armored vehicle is actually not a tank, but a self-propelled gun (mobile artillery). Officially called the 2S1 Gvozdika, it is of Russian origin, and packs a 122mm smoothbore cannon that has an effective artillery range of about 13.6 miles. Under the, uh, hull, is a 300 horsepower diesel engine that has a maximum range of 310 miles. It's grossly overweight when compared to the Jeep, but it does have the advantage of being immune to small arms fire, plus it can go over most traffic jams and blast away most obstacles.

Here Are Some Actual Drag Races: 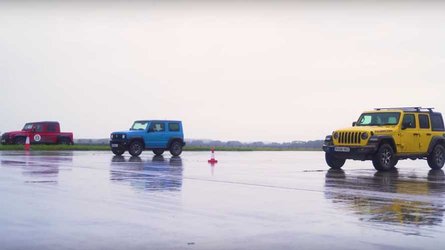 In any case, you'll get to see these two vehicles slog it out in extremely slippery and deep mud, with both vehicles struggling to keep traction. On the plus side, at least Mike gets to enjoy some music, climate control, and leather seats as he crosses the line in first. Honestly there must have been a better way to make use of Tiff, right?