It could be electrified.

BMW M is likely to go down the Mercedes-AMG route by coming out with its own model to serve as the brand’s halo performance car. While it’s unlikely to be as extreme as the F1-engined One hypercar, the M division’s crown jewel is expected to be more special than all the M cars on sale today. Even though it hasn’t been entirely confirmed yet, the M boss is dropping some serious hints that it’ll happen sooner or later.

Speaking with Auto Express at the 2019 Los Angeles Auto Show, Markus Flasch made an interesting statement in regards to a flagship M car: “I can think of doing standalone M-cars – I like the idea and I think we’re going to do something in this direction.” He went on to mention it wouldn’t necessarily have to be a mid-engined supercar, but whatever form it would take, it “has to stand out from the crowd.”

He also did not exclude the possibility of going with a different shape than the sleek Vision M Next concept pictured here, and when asked whether it could be an SUV, he replied with: “I don’t know… Well I do know, but I’m not saying yet! This tells us the M division certainly has something in mind, but a production version is unlikely to come out sooner than 2021.

Markus Flasch revealed during the L.A. show an electrified M car is “not too far away,” but that doesn’t necessarily mean the possible standalone car is also going to pack a hybrid powertrain as it was the case with the Vision M revealed back in June. The concept had an electrified four-cylinder engine with 600 horsepower enabling a 0 to 62 mph (100 km/h) in three seconds and a top speed of 186 mph (300 km/h). Its battery pack had enough juice for a decent electric range of 62 miles (100 kilometers).

It Depends On You: 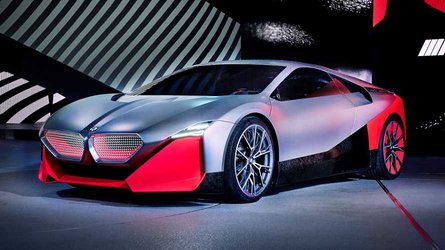 Whether the standalone M car will be a production version of the Vision M remains to be seen, but we’re excited to see BMW’s performance division appears to be interested in coming out with a car set to stand out from the current crop of Ms.