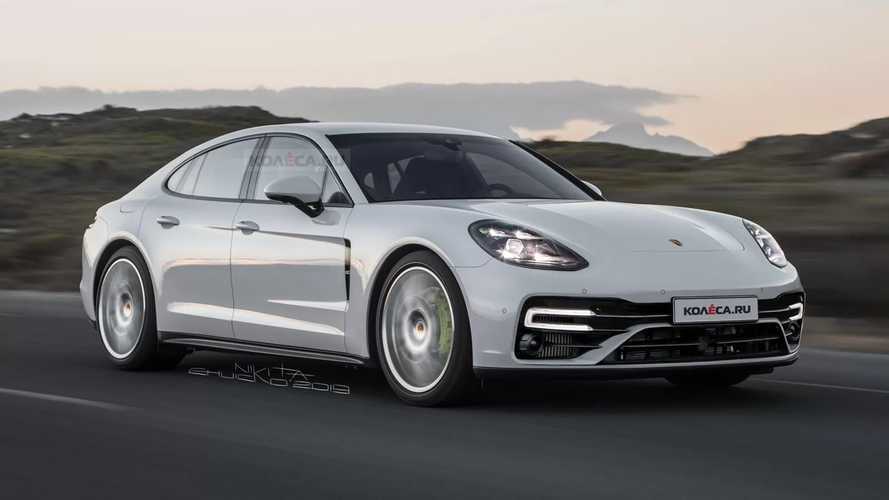 The revised Panamera looks familiar, but the tweaks are attractive.

Spy shots reveal that a refreshed Porsche Panamera is coming, and now the artists at Kolesa in Russia have renderings imagining what the updated four-door might look like. This creation looks very close to what Porsche is actually working on.

The refreshed Panamera doesn't wear a major styling overhaul. The designers keep the tweaks to the front and rear, while leaving the rest of the styling alone. In front, Porsche tweaks the lower fascia and revises the turn signals. While Kolesa's rendering connects the lamps at the edges, the spy shots suggest the two sections would be separate.

At the back, the revisions are even smaller. Tweaked taillights are the most noticeable alteration. In addition, there are tiny changes to the bumper, too.

Porsche Panamera Spied Inside And Out With Discreet Updates
⠀

Porsche Cooking Up Something With Mysterious Panamera At Nürburgring

While the styling isn't much different, there are rumors about a new range-topping model joining the lineup. A small team is working on it under the codename Lion. The scant info suggests that the output could grow to as high as 820 horsepower (611 kilowatts). Although, other reports put the power at a more modest 750 hp (559 kW).

In addition to the extra power, the Lion is reportedly 550 pounds (250 kilograms) lighter due to a stripped interior and less sound deadening. It would ride on sticky Michelin performance tires for sharper handling.

A debut date for the refreshed Panamera is still a mystery. However, it's a safe bet to expect to see the four-door in showrooms in 2020. Expect Porsche to follow the usual strategy of unveiling a few variants at a time, and the Lion would probably be the last of them. An updated Sport Turismo with similar tweaks is on the way, too.