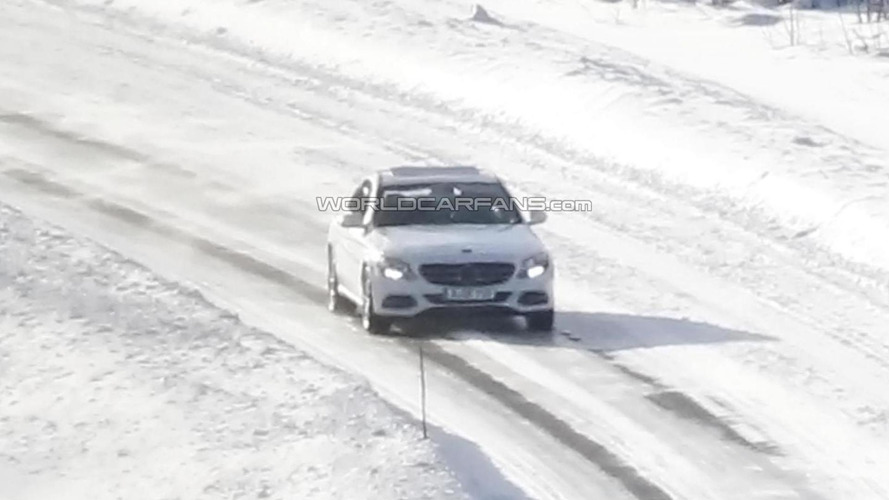 Our spies snapped a few photos with an undisguised 2014 Mercedes-Benz C-Class, ahead of the car's public debut scheduled for January 2014 at Detroit Auto Show.

Our spies snapped a few photos with an undisguised 2014 Mercedes-Benz C-Class testing in Northern Scandinavia, ahead of the car's public debut scheduled for January 2014 at Detroit Auto Show.

Although it will be radically different than current model, the new C-Class is not what we consider a surprise after seeing the A-Class, CLA and the more recent S-Class. Mercedes-Benz has taken styling cues from these three cars, along with the headlights of the facelifted E-Class. The exhaust setup mimics the one seen on the upcoming S-Class.

The next-gen Mercedes-Benz C-Class sedan has been confirmed to go on sale in August 2014 and will be followed in 2015 by the coupe and convertible. Shortly after these two a plug-in hybrid variant will be launched.

In an interview given to Automotive News, Mercedes-Benz USA CEO Steve Cannon said the wagon won't be sold in U.S. due to weak demand. He also mentioned there are no plans for a crossover variant and he described the BMW 3-Series GT as "an answer to production question that no one is asking for."

The automaker will upgrade its Tuscaloosa, Alabama factory to make it ready for the new C-Class production. At this facility Mercedes-Benz will produce at least 100,000 units per year. This will be the first C-Class ever to feature a U.S.-built engine as Daimler and Nissan have teamed up to produce four-cylinder M-B engines at Nissan's factory in Decherd, Tennessee starting next year.