The all-in-one Overlanding package sleeps four and is fully equipped for an off-grid weekend.

When it comes to SEMA, most people envision crazy cars or punched-up trucks that can climb the Statue of Liberty in a single bound. Naturally, everything at the show has horsepower up the wazoo, and paint jobs are as wild as hungry lions. This camper-infused Ford Super Duty doesn't really have any of that, but it's still quite impressive and yes, it debuted at the 2019 SEMA Show. And it wasn’t the only one. 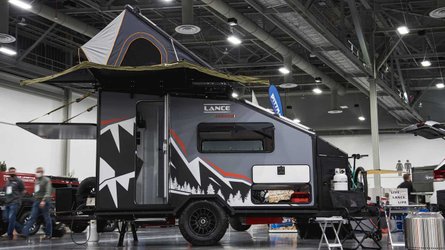 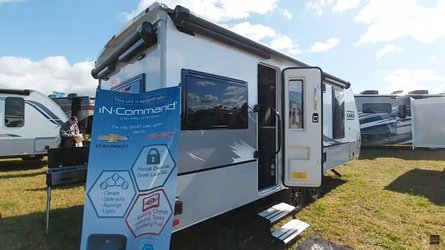 The world-famous aftermarket auto event launched a new Overland Experience area, and this offering from Lance Camper was one of many off-road-capable RVs in the area. This motorhome ticks our cool box for several reasons, the first being it’s a drop-in camper that can fit into any truck, and as such, it can also come out when not needed. In this instance, the truck is a 2019 Ford F-350 fitted with an ICON Stage 5 suspension upgrade that adds a 2.5-inch lift. The big camper also requires upgraded sway bars on the truck to better handle side-to-side motion caused by the camper, and air springs at the rear keep the pickup level under all the weight.

As for the accommodations, the shell is a Lance Camper 855S model that’s billed as a four-season rig for four people. It includes a slide-out dinette, small kitchen, bathroom with shower, and electronics galore. The fresh water tank is 30 gallons, with a grey water capacity of 20 gallons. Two five-gallon propane tanks are also part of the package. As part of this Altimeter build, Lance adds three 100 Ah Deep Cycle batteries from Battle Born Batteries, as well as a Warn Ascent bumper with a winch and a cool stereo with camper speakers.

Lance doesn’t mention price or if the Altimeter is a complete package one can purchase, but one can peruse the full options list for the 855S on the company’s website, lancecamper.com