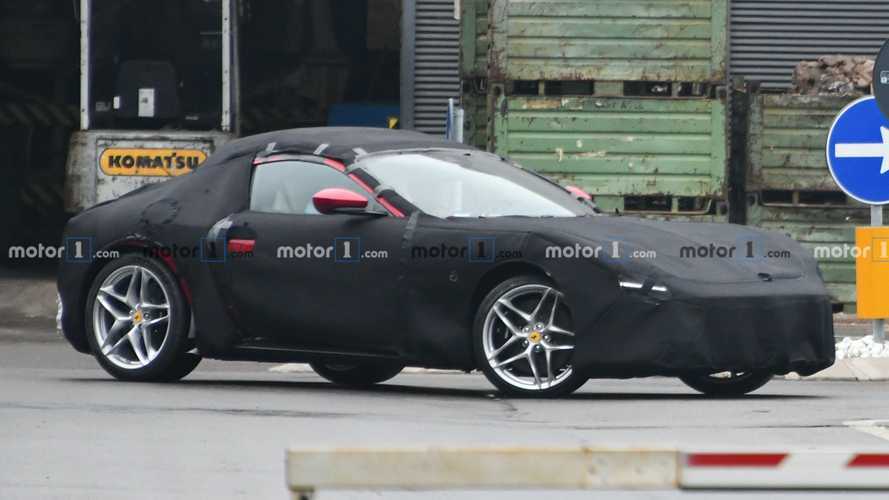 The new Ferrari could debut within a week.

Last month, a video provided us our first look at the fixed-roof Ferrari Portofino. Specifics about the new Ferrari were, and remain, elusive, and new spy photos from Motor1.com reader Angelo fail to show us anything new. The car still wears the same thick cladding and extra body panels that distort the car’s actual shape. However, the photos do confirm Ferrari is preparing a new model.

Check Out The Spy Video:

Ferrari is mum about the model, as automakers tend to be when (not) discussing future products, but Ferrari Chat is ablaze with speculation. While this is, in essence, a fixed-roof Portofino, it could not only arrive with a different model name; it could have a shorter wheelbase, too. The shorter wheelbase could eliminate the Portofino’s pointless rear seats.

When the Portofino coupe arrives, it’ll use the same powertrain as the convertible – Ferrari’s twin-turbocharged 3.9-liter V8. It produces 600 horsepower (441 kilowatts) and 560 pound-feet (760 Newton-meters) of torque, running through a seven-speed dual-clutch transmission. But it may not be the only powertrain option, at least after launch. There’s speculation Ferrari’s new V6 hybrid could find its way under the hood eventually.

We could see the Ferrari very soon. Several Ferrari Chat members reported that they are seeing the car next week, either November 13 or 14, at an event in Rome, Italy. It’s not clear if this is a private event for potential customers or a larger public reveal. A private event raises the chances of photos and info about the car leaking on social media.

Either way, it’s doubtful Ferrari will keep its next new model under wraps for much longer. Auto show season is upon us, which means automakers are ready to roll out their newest models to the public. Then again, a splashy auto show reveal isn't Ferrari's usual M.O.

Big thanks to Angelo for the photos!