Toyota Raize Gets Sporty Look With TRD And Modellista Upgrades 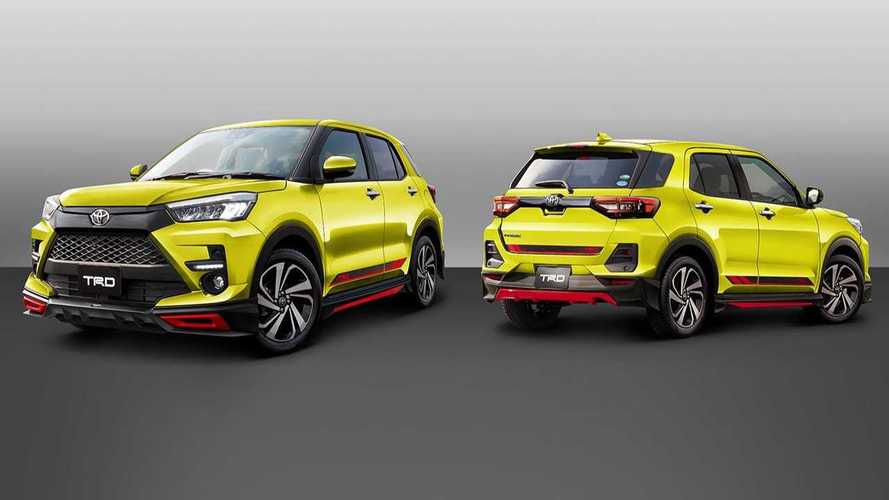 The cute little SUV gets angrier.

Toyota’s in-house TRD and Modellista divisions are not wasting any time as whenever there’s a new model launching in Japan, both sub-brands come out right away with an assortment of upgrades. Case in point, the cute little SUV introduced this week with the name “Raize” is being bombarded with numerous add-ons in an attempt to make the sub-four-meter vehicle look a bit angrier.

Kicking off with the parts developed by Toyota Racing Development, most of them focus on the exterior as customers can opt for a new front spoiler finished in matte black with contrasting red accents. The side skirts have the same two-tone look, which continues at the back on the rear bumper. While some will surely appreciate the body kit, it’s worth mentioning the Raize loses some of its ground clearance after installing the upgrades.

Red and black decals on the bottom of the doors as well as on the tailgate can be added, along with a front bumper garnish to round off the changes. There are a bunch of other TRD-branded items tailored to the small SUV, varying from a sunshade to door handle protectors, while a red start/button is also available with the TRD logo. In addition, the luggage mate also proudly carries the TRD avatar.

If the components developed by TRD are not your cup of tea and you want something more striking, Modellista has just the right goodies. Their front and rear bumpers stand out more, as do the side skirts and the snazzy wheel designs available in sizes of up to 18 inches. They even have dual exhaust finishers, which might be a bit too much seeing as how the Raize has a puny three-cylinder 1.0-liter turbo engine.

Modellista’s list of upgrades is quite extensive as customers can get just about everything from a front grille cover to a tailgate garnish. A chunky roof-mounted rear spoiler completes the package if you’re after a sportier-looking Raize. Modellista has two body kits created specifically for the miniature RAV4, curiously known as “Elegant Ice Style” and “Advanced Blast Style,” with each encompassing different exterior parts.